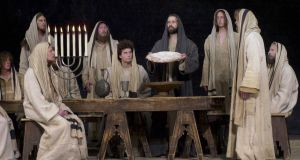 A picture taken in May 2000 shows Martin Norz (C) as Jesus Christ during a rehearsal of the passion play in Oberammergau, Germany. File photograph: Daniel Samanns/AFP/Getty Images

Several times a week, during the cold months in Berlin, I think of Oberammergau.

The pretty Bavarian town comes to mind every time I arrive home to a cold apartment: rather than wait for the heating, I reach instead for my woollen cardigan to warm up in 30 seconds.

The brown knitted cardigan with horn buttons is my memento of the 2010 Oberammergau Passion Play – an outdoor theatrical spectacle of Christian belief and Bavarian tenacity that stretches back to 1633.

In the midst of the devastating 30 Years’ War, desperate villagers swore an oath to God: spare our village from the advancing bubonic plague and we will perform a play recalling the passion, death and resurrection of Jesus Christ. Every decade, in perpetuity.

On its last, 41st outing, I was one of thousands to see the moving spectacle: two acts and six hours, with colourful musical interludes.

“The dramatic highlight,” I wrote back then, “is the bone-chilling scene when more than 800 Oberammergau villagers on stage scream to Pontius Pilate: ‘Crucify him!’”

No such shouts will ring out this Good Friday. The village of 4,000, with beautifully painted house facades, has no buzz of visitors on its winding streets. The curtain will not rise this year on the 42nd passion play. A tradition arising from one plague has been halted by another: Covid-19.

Oberammergau is learning the hard way how difficult it is to accept social distancing when an entire community lives on the ultimate form of social contact: tourism.

The numbers involved in holding the play speak for themselves: 100 performances, 2,000 beds, and restaurants and shops selling food, local woodcrafts and clothes. Instead of the forecast €50 million in revenue, the community faces a bill of €23 million. Town officials hope their insurance policy will cover most of the lost investment, but saving local businesses from ruin will be a priority for Andreas Rödl, a local police captain who takes over as mayor on May 1st.

“Things will be different after,” he has warned his neighbours, “certainly not like they were before.”

Gift shop owner Gabi Furtner has withdrawn job offers to two extra employees she had planned to hire and is now applying for bridging loans.

“When the trumpet fanfare sounds to open the play season, the whole village gets goosebumps,” she says. “It’s such a shame it’s not happening, but we’ve been through worse and we’re all in this together.”

The passion play attracts thousands of visitors from around the world but, at its heart, remains a touchstone for people of Christian faith in Germany, in particular the largely Catholic state of Bavaria.

Stepping inside any one of these churches brings a bracing dose of Bavarian baroque, a local branch of the Italian style that took off here in the 17th century. Even the smallest chapel, in the most out-of-the-way corner of Bavaria, is a symphony of stucco, ceiling frescoes, gold leaf, optical illusions and wood carvings. Many of the carvings in these Bavarian baroque churches originated in Oberammergau, a home to the trade since the 16th century.

As local carvers, hoteliers and shop owners face into a quiet Easter weekend, many say the enforced peace of the coronavirus lockdown has given them time to reflect.

The passion play, though a huge economic boost to this rural area, is about more than just commerce. In an era of secularisation, individualism and social isolation, locals’ passion for the Passion brings the entire village together.

In his parish office, local priest Fr Thomas Gröner says the cancellation of all religious services this Holy Week has forced him to improvise: sermons will be streamed on the web and, on Good Friday at 5pm, there will be an outdoor broadcast of music from the play.

As elsewhere in western Europe, religious belief and practice in Catholic Bavaria is in decline. But Fr Gröner says this is the one week of the year when he has a headstart on clerical colleagues elsewhere.

“Everyone here knows exactly what happens on Good Friday because they’ve all played it out,” he jokes. “The passion play teaches us about suffering, death and resurrection, something we’re living now. The play isn’t cancelled, it will rise again in 2022. In spite of everything, life goes on.”

1 Dangerous student stalker sentenced to seven years in jail
2 All students will not return to school even if social distancing rules are relaxed – McHugh
3 Miriam Lord: Taoiseach is trapped in a Zoom session from hell
4 Miriam Lord: Reluctant Halligan bangs the nail on the head
5 Trump announces clampdown on social media companies
Real news has value SUBSCRIBE