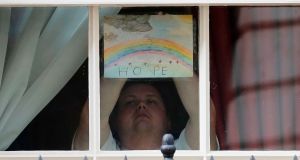 A member of staff signals a symbol of hope from a window at 10 Downing Street. Photograph: Getty

British prime minister Boris Johnson has left intensive care and been moved to a general ward for “close monitoring” of his recovery from coronavirus, Downing Street said on Thursday night.

The prime minister was admitted to hospital last Sunday with persistent symptoms of the virus and was moved into intensive care on Monday after he experienced difficulty breathing.

At a press briefing earlier, foreign secretary Dominic Raab, who is deputising for the prime minister, said he “continues to make positive steps forward and he’s in good spirits”.

Chief medical adviser Patrick Vallance told the briefing that the rate of hospital admissions for Covid-19 in Britain is starting to flatten as a result social distancing measures but the daily death toll will continue to rise for a number of weeks. Mr Vallance said the number of new cases was not accelerating and there would be “many, many more people in hospital” if it were not for the lockdown.

Britain recorded 881 new deaths from the coronavirus on Thursday, bringing the total to 7,978.

“This will not change for a few weeks because the deaths come after the illness, the early illness, the intensive care,” said Mr Vallance.

Mr Raab said the PM, who was due to spend his fourth night in intensive care, “continues to make positive steps forward and he’s in good spirits”. Mr Raab, chaired a meeting about the virus on Thursday of senior ministers, leaders of the devolved administrations in Scotland, Wales and Northern Ireland and the mayor of London.

They discussed the lockdown, which is due to be reviewed next week, but Mr Raab made clear that there would be no decision about when or how to lift the restrictions until the end of next week.

“The government is continuing to gather all of the relevant data to obtain the fullest picture possible of the effect of the social distancing measures we have put in place. Now, while the early signs suggest that they are having the impact we need to see, it’s too early to say that conclusively,” he said.

“As we’ve said on many occasions now, we will be guided by the science at all times. So we don’t expect to be able to say more on this until the end of next week. Let me just be, again, very clear about this. The measures will have to stay in place, until we’ve got the evidence that clearly shows we have moved beyond the peak.”

Mr Raab acknowledged the toll the restrictions are taking on the public, including on people’s mental health. And in a sign of the economic cost of shutting down the economy, the government said it is expanding the size of its “Ways and Means facility”, a kind of overdraft from the Bank of England.

Labour has called on the government to publish their strategy for exiting the lockdown and starting the return to normal economic activity.

“Labour urged the government to bring in the so-called lockdown and supports maintaining enforced social distancing to save lives and protect the National Health Service where it is based on medical evidence,” said shadow health secretary Jonathan Ashworth.

“The British public have shown tremendous resolve in adhering to measures but are understandably looking for greater clarity from ministers on their exit strategy. We’ve said previously that a lockdown in itself is a blunt tool without a national strategy for community testing and contact tracing. We’re calling on ministers to outline the next stage of their strategy to give the public the reassurance and clarity they expect.”