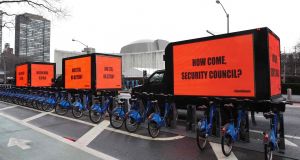 Inspired by the Oscar-nominated film, three billboards circle the United Nations headquarters in New York on Thursday to demand action on Syria in advance of a Security Council vote. Photograph: Timothy A Clary/AFP /Getty Images

Russia has blocked a UN resolution that would have established a 30-day ceasefire and humanitarian deliveries in eastern Ghouta, saying that widespread reporting of heavy civilian casualties in the besieged area on the edge of the Syrian capital, Damascus, was a product of “mass psychosis”.

The Russian envoy to the UN, Vassily Nebenzia, told an emergency meeting of the UN Security Council on the situation in eastern Ghouta that Russia would not support the ceasefire resolution put forward by Sweden and Kuwait in its present form, calling it unrealistic. He circulated a list of proposed Russian amendments.

Moscow has vetoed 10 previous UN resolutions on Syria and has consistently used its permanent seat on the Security Council to shield the Syrian president, Bashar al-Assad, from concerted UN action on war crimes. In November Russia used its veto to block a resumption of UN investigations into the use of chemical weapons by Syrian forces.

On Thursday, Mr Nebenzia made clear that Russian support for Mr Assad would continue, and portrayed the accounts and harrowing video footage of heavy civilian casualties in the rebel-held enclave of eastern Ghouta as fake news.

“The mass psychosis in global media outlets, in co-ordination, disseminating in recent days the same rumours, in no way do anything to help improve and understanding of this situation,” Mr Nebenzia told the council session that Russia had called.

Before the Russian envoy spoke, the council heard a report from the UN under-secretary general for humanitarian affairs, Mark Lowcock, who said 50 civilians had been reported killed and 200 wounded in heavy shelling in the 24 hours before the session.

He said humanitarian deliveries to besieged populations in Syria were sharply down this year. Convoys were reaching 22,000 trapped people a month in the past three months compared to an average in 2017 of 175,000 a month.

In a video-link from Geneva, Mr Lowcock read out messages from trapped civilians under fire appealing for help from the international community. “You’re all as member states aware that your obligations under international humanitarian law are just that. They are binding obligations. They are not favours to be traded in a game of death and destruction,” he said.

“Humanitarian access is not a ‘nice-to-have’. It is a legal requirement,” Lowcock said. “Counter-terrorist efforts cannot supersede the obligation to respect and protect civilians. They do not justify the killings of civilians and the destruction of entire cities and neighbourhoods.”

Mr Lowcock said seven civilian hospitals and clinics had been targeted with bombardment on Wednesday alone.

Mr Nebenzia replied that the reports that Syrian forces and their backers were bombing health facilities were “a well-known tactic in information warfare”.

He said it was “fully clear” that fighters based themselves in medical and educational facilities. “However, this is an inconvenient truth that is not being disseminated.” The Russian envoy said there were “several thousand fighters that have not yet been vanquished” in Ghouta.

Before the vote, the German chancellor, Angela Merkel, denounced the mass killing of civilians in eastern Ghouta.

“What we currently see, the dreadful events in Syria, a regime fighting not against terrorists, but against its own people, the killing of children, the destruction of hospitals – all this is a massacre which needs to be condemned,” Merkel told Germany’s parliament.

The chancellor said her government would talk to Moscow and would “do everything that is within our power so that this massacre comes to an end”. – Guardian