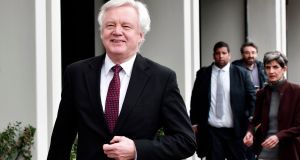 Britain’s Brexit secretary David Davis after his meeting with the Greek minister for foreign affairs in Athens on Wednesday. Photograph: Louisa Gouliamaki/Getty Images

The UK’s response on Wednesday to EU proposals on the continuation of the status quo “transition” post-March 2019 reflects what London says is a “broad alignment” of positions between the two sides.

Changes it proposes to legal text on transition – the UK still calls it an “implementation” period – are largely attempts to remove uncertainty or to tidy up the proposed EU draft.

Both London and Brussels negotiators agree that it should be relatively straightforward to agree a transition text as part of the withdrawal agreement for the March 23rd EU summit. That will also see leaders approve draft negotiating guidelines for the phase two “future relationship” talks.

Crucially, the UK proposes a joint committee to supervise the withdrawal agreement, with specific functions in relation to transition, a mechanism that will find approval in the EU.

The UK takes issue with Brexit task-force proposals to limit the transition to 21 months, until the end of 2020. The implementation period “should be determined simply by how long it will take to prepare and implement the new processes and new systems that will underpin the future partnership”.

But how long is a piece of string? Negotiations invariably expand to fit the time available.

Contrary to suggestions from Brexiteers that this is a vague, disingenuous formula being used to justify an indefinite transition, the UK insists that it wants to see a firm date agreed for “about two years” from the time transition begins at the end of March 2019. Their only purpose, they say, in putting the EU’s suggested date in brackets (a diplomatic convention for “to be discussed”) is to start such a discussion.

For the EU, the date of end-2020 is not an issue of principle, but if the UK insists on transition beyond that date it will enter a new budget cycle and necessitate further discussions on its divorce bill.

One of the UK’s main problems with the EU transition is its insistence that it should be allowed to treat EU citizens settling in the UK during transition differently – their expectations, after all, Theresa May has argued, are different.

The issue is not raised, except by implication, in the task-force transition text and so the UK does not raise the issue in its response. But the EU insists that its own paper makes clear that the full “acquis” – the corpus of EU laws, regulations, rights and obligations – will apply throughout transition. The rights of these citizens included, and the issue will be hard fought separately from the transition agreement.

The UK is also suggesting that arrangements for future foreign policy and security co-operation should start during transition. It is also concerned to dilute suggested provisions that would debar it from so-called “opt-in” or “enhanced co-operation” projects and from playing a leadership role in specific projects during the transition. None of these issues should prove insurmountable in talks.

The suggestion that the treaty should reflect explicitly “a mutual duty of good faith” on both parties is seen as unexceptionable, an implicit presumption of all treaties.