Serbia says it will not sacrifice Russia ties for EU membership

Grenade hits US embassy in Montenegro amid geopolitical tussle in Balkans 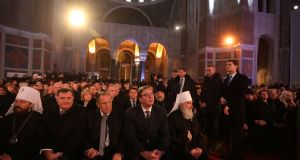 Serbia has told Russia it will not sacrifice the two countries’ close relations to secure European Union membership, as Moscow accused the EU and Nato of endangering continental stability by forcing states to choose between East and West.

Russian foreign minister Sergei Lavrov met Serbian leaders in Belgrade during a visit that emphasised the long diplomatic and religious ties between the states, amid jostling between Moscow, Brussels and Washington for influence in the Balkans.

Tension over the region’s direction was highlighted in the early hours of Thursday morning when a man threw a hand grenade at the US embassy in Montenegro and then blew himself up. Local media said he was a Serbian-born veteran of the 1990s Balkan wars.

No one else was hurt in the attack in the tiny Adriatic state, which joined Nato last year despite widespread opposition among local Serbs and from Russia, which Montenegrin officials accuse of involvement in an alleged 2016 coup attempt.

“Serbia won’t be changing its policy toward Russia and will not impose sanctions on Russia,” said Serbian president Aleksandar Vucic, referring to economic measures taken by the EU in response to Moscow’s aggression in Ukraine.

“Serbia will continue to pursue its own policies and we expect to get understanding from the EU. If not, Serbia is an independent and free country.”

Mr Lavrov said Russia – which annexed Crimea and fomented a separatist war in eastern Ukraine after the country’s 2014 pro-western revolution – had “always been in favour of partners having the freedom of choice and developing their political ties”.

“We do not fear for Serbia as long as it has a government elected by the people – President Vucic and his team,” he added.

Mr Lavrov made clear, however, that Russia saw Serbia’s pledge to stay out of Nato as vital to their relations and regional security.

“We are convinced that such a commitment is the most important thing for stability in the Balkans and the European continent as a whole,” he said. “Also, the countries of the region must not be forced to make a false choice between the West and the East – that is, Russia.”

In a joint editorial for Russian and Serbian newspapers, Mr Lavrov and his Belgrade counterpart Ivica Dacic criticised “the damaging ‘with us or against us’ habit, which has already deepened mistrust and instability” in Europe.

The diplomats joined Mr Vucic, nationalist Bosnian Serb leader Milorad Dodik and senior Orthodox clerics for the unveiling of a mosaic on the ceiling of the landmark St Sava church in the Serbian capital.

The project, which was funded by a Russian energy firm, “symbolises the spiritual and cultural closeness of our citizens and churches”, Mr Lavrov said.

He also celebrated 180 years of diplomatic relations between Belgrade and Moscow, and was reportedly given a letter from Mr Vucic inviting Russian president Vladimir Putin to Serbia.

Russia is Serbia’s dominant energy supplier and has agreed to donate ageing fighter jets and tanks to Belgrade’s military; Serbian media reported that a deal for Russian attack helicopters could also be discussed during Mr Lavrov’s visit.