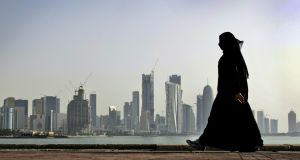 Qatari woman walks in front of the city skyline in Doha, Qatar. Qatar has called the charges baseless and says the demands are so severe that they seem intended to be rejected. Photograph: Kamran Jebreili/AP

Qatar has handed over its response to a list of extraordinary demands made by Saudi Arabia and three allies after they imposed an embargo on the Gulf state, accusing Doha of sponsoring terrorism.

Sheikh Mohammed bin Abdulrahman Al Thani, the Qatari foreign minister, gave his government’s position to Kuwait, which is mediating the dispute, on Monday as diplomatic efforts to end the worst crisis in the Gulf for years were ramped up. No details of Doha’s reply were made public.

Saudi Arabia, the United Arab Emirates, Bahrain and Egypt severed ties and transport links with Qatar a month ago. The four then gave Doha 10 days to comply with 13 demands, including that it pay reparations, close a Turkish military base in the country and shut down Al Jazeera, its satellite television network.

On Monday, they said they would give Doha an extra 48 hours to comply.

Qatar, which denies supporting terrorism, says it is willing to discuss matters related to regional security, but says it will not countenance any limits on its sovereignty. Sheikh Mohammed has described the demands as being “made to be rejected”.

Qatar, the world’s largest liquefied natural gas exporter and one of its richest nation’s in per capita terms, insists it can withstand the embargo, and it has received support from Iran and Turkey.

“There is no fear from our direction. We are ready to face the consequences,” Sheikh Mohammed told reporters at the weekend. “There is an international law that should be respected and not violated.”

The crisis pits important US allies against each other and US president Donald Trump, who initially sided with Riyadh, on Sunday called for “unity in the region” to “defeat terrorism”.

Mr Trump spoke to the leaders of Saudi Arabia, the UAE and Qatar, the White House said.

“He reiterated the importance of stopping terrorist financing and discrediting extremist ideology,” the White House said in a statement. “The president also underscored that unity in the region is critical to accomplishing the Riyadh Summit’s goals of defeating terrorism and promoting regional stability.”

Mr Trump met the leaders of the Gulf states, including Qatar, in Riyadh in May, his first official foreign trip, during which he sought to cement an alliance against Iran.

Qatar hosts 11,000 American soldiers at Al Udeid, the main US military base in the region, and the dispute threatens to undermine the regional response to Islamist extremist groups such as Isis.

On Monday, Mr Trump tweeted: “Spoke yesterday with the King of Saudi Arabia about peace in the Middle-East. Interesting things are happening!”

A person close to the Qatari government said Doha’s response to the demands was expected to differentiate between accusations it believes are baseless and areas where it would be open to negotiation.

“If they can prove any political or security issue that is affecting the Gulf states because of Qatar, then we can take that into consideration with an open mind,” he said. “But it is not for them to come and give us an ultimatum and impose their will.”

Two diplomats following the crisis say both sides are moving closer to a potential compromise, given the need for Qatar to find a solution to the economic embargo. The four Arab states are also conscious that their aggressive stance towards their neighbour risks alienating western allies, the diplomats said.

“There can be no quick resolution, but we might see the start of a long process of negotiation and de-escalation,” one diplomat said.

Any compromises could include Qatar toning down the coverage of Al Jazeera’s Arabic language channel, expelling some Islamists and sharing more information on the financing of Islamist groups.

However, there have been few signs that any of the parties are yet willing to make concessions. “We are very serious – they either accept or they don’t,” said an adviser to one of the four states that imposed the embargo. “This has to do with our safety and stability, and has been brewing for a long time.”

The US is working closely with Kuwait after two weeks of shuttle diplomacy in Washington. The US is keen to broker an end to the dispute, while also seeking to extract measures from all sides that will buttress its counter-terrorism agenda.

Riyadh and its allies’ main accusation is that Doha has been funding terrorist groups, particularly in Syria and Libya, and fuelling the chaos plaguing the Middle East. They have long accused Qatar of using Al Jazeera’s Arabic language channel as a propaganda tool that provides a platform for Islamists.