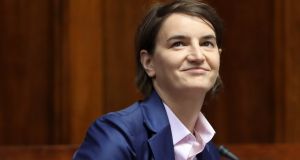 Serbia’s parliament has approved Ana Brnabic as its new prime minister, making her the first woman and first openly gay person to lead the Balkan nation, but she is expected to be tightly controlled by dominant president Aleksandar Vucic.

“The time ahead of us will show if we are brave enough to move boundaries,” Ms Brnabic (41) told deputies, before they backed her by 157 votes to 55.

“Now is the moment to make a step forward and take our society, country and economy into the 21st century . . . if we don’t take this chance, we can hardly expect to get another one.”

Ms Brnabic, who studied at universities in the United States and Britain, said she wanted to improve Serbia’s education system and slash red tape – a task she undertook in the previous cabinet as minister for public administration.

She vowed to accelerate Serbia’s halting progress towards membership of the European Union, calling the bloc “our main direction” and a symbol of “the values that we stand for”.

“This is the place where Serbia should be,” she declared, while pledging to continue Mr Vucic’s efforts to maintain good relations with Russia, China and other nations to the east.

In a socially conservative country where nationalism and the Orthodox Church are strong, Ms Brnabic has faced some disapproval and even accusations of being an agent of western powers.

“That is an insult for the republic of Serbia and all its citizens. Do you think the Serbian state is so ridiculous that no security services would react?” she said in parliament.

From pro-western deputies Ms Brnabic faced questions over the appointment as defence minister of Aleksandar Vulin, who is seen as pro-Russian firebrand who frequently irks Serbia’s Balkan neighbours with his nationalist views.

Just as Mr Vucic was information minister under Serbia’s warmongering leader Slobodan Milosevic in the late 1990s, so Mr Vulin was a founder and spokesman for the Yugoslav Left, which was run by Mr Milosevic’s wife, Mirjana.

“We want to take care of our security, protect our own sky, country and people. We must maintain a policy of friendship with both Nato and with Russia,” Mr Vulin said.

“We will not impose sanctions on Russia, but we will not stop co-operation with the West, either. Serbia is not a country that should enter into conflicts with anyone.”

One of Mr Vucic’s last acts as premier before his landslide presidential election win in April was to secure fighter jets and armoured vehicles from Russia, which are expected to arrive soon.

Risk consultants Teneo Intelligence said that by “nominating a competent, but politically weak prime minister, Vucic . . . seeks to solidify his influence over Serbian politics . . . resulting in an unprecedented concentration of power since Slobodan Milosevic’s rule in the 1990s.”