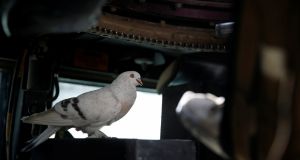 A pet dove of a member of Iraqi forces inside an armoured fighting vehicle at the frontline in the Old City in west Mosul, Iraq, on Tuesday. Photograph: /Erik De Castro/Reuters

Iraqi forces, battling up to 350 militants dug in among civilians in the Old City, said federal police had dislodged Islamic State insurgents from the Ziwani mosque and were only a few days away from ousting militants completely from the Old City.

“The victory announcement will come in a very short time,” prime minister Haider al-Abadi said on his website on Monday evening.

“The operation is continuing to free the remaining parts of the Old City,” Lieut Gen Abdul-Wahab al-Saadi of the Counter Terrorism Service (CTS) told a Reuters correspondent near the frontline in the heart of the Old City.

“In a few days our forces will reach Corniche and bring the battle to its conclusion,” said Lieut Gen Jawdat, adding that police had forced militants out of Ziwani mosque in the Old City’s southwestern corner.

The fall of the northern Iraqi city would mark the end of the Iraqi half of the “caliphate” proclaimed by Islamic State, also known as Isis, though the militant group remains in control of large areas of both Iraq and Syria.

In Syria, the Islamic State-held capital of Raqqa, is virtually encircled by a US-backed, Kurdish-led coalition.

Federal police and elite CTS units in Mosul were battling with Islamic State fighters in the Old City’s maze of narrow alleyways, along with the army and interior ministry units.

Up to 350 militants are estimated by the Iraqi military to be dug in in the Old City among civilians in wrecked houses and crumbling infrastructure. They are trying to slow the advance of Iraqi forces by laying booby traps and using suicide bombers and snipers.

Those residents who have escaped say many of the civilians trapped behind Islamic State lines – put at 50,000 by the Iraqi military – are in a desperate situation with little food, water or medicines.

A US-led international coalition is providing air and ground support in the eight-month-old offensive.

The Iraqi government once hoped to take Mosul by the end of 2016, but fighting has dragged on as militants have reinforced positions in civilian areas, effectively using residents as human shields.

Hundreds of civilians who managed to escape as the forces advanced into the Old City gathered on the side of the road at the edge of western Mosul on Tuesday.

But hundreds of civilians have been killed in the past month as they tried to flee the Old City.

The militants last week destroyed the historic Grand al-Nuri Mosque and its leaning minaret from which their leader Abu Bakr al-Baghdadi declared a caliphate spanning parts of Iraq and Syria three years ago. The mosque’s grounds remain under the militants’ control.

Only a handful of districts remained to be cleared, Lieut Gen Saadi said, standing atop a rooftop overlooking al-Faruq street which now marks the frontline, a few dozen metres from the old mosque.

Sporadic sniper fire could be heard, and an incoming rocket, as the troops used a drone to survey the insurgents’ defences.

The Iraqi forces started attacking the western side of Mosul in February, a month after taking the side located east of the Tigris.

About 850,000 people, more than a third of Mosul’s pre-war population, have fled, seeking refuge with relatives or in camps, according to aid groups.

Baghdadi has left the fighting in Mosul to local commanders and is assumed to be hiding on the Iraqi-Syrian border. There has been no confirmation of Russian reports over the past days that he has been killed.

The group has carried out sporadic suicide bombings in parts of Mosul using sleeper cells. It launched a wave of such attacks late on Sunday, trying to take control of a district west of the Old City, Hay al-Tanak, and the nearby Yarmuk quarter.