More Europe: will Brexit clear a path to ever greater EU integration?

Brexit will strengthen southern states and have a big effect on defence, economic policy and taxation 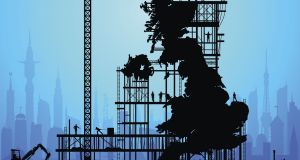 Ireland’s European partners may expect a greater willingness from Ireland to subordinate its interests on issues such as tax policy. Illustration: Getty

The slogan emblazoned on the Vote Leave battle bus last year, promising an extra £350 million a week to spend on the National Health Service, was the most controversial and effective of the referendum campaign. It was false on both counts – Britain’s net contribution to the European Union is much smaller and the savings will not all go to the NHS – but it pointed towards a broader truth.

When Britain exits in March 2019, it will leave behind it a large hole in the EU budget, which will create problems for the remaining 27 member states. Britain is the third-biggest net contributor after Germany and France, accounting for 13.45 per cent of the EU’s revenue in 2016.

Three-quarters of the EU budget comes from a levy placed on member states on the basis of their economic output, with customs duties and VAT making up most of the rest. The figure varies from year to year but Britain’s withdrawal will leave a gap of about €9 billion every year in the EU budget.

Most EU member states are net recipients of EU funds, and the loss of one of the biggest net contributors will mean that other countries will have to pay more or spending on programmes will have to be cut. This reality is what informs the hard line adopted by most member states in the negotiations over how much Britain should pay the EU to settle its obligations as it leaves. But it will also serve to limit the immediate ambitions of the union after Brexit.

According to an analysis by the European Commission of the economic impact of possible future trade arrangements between Britain and the EU, Brexit will mean an annual loss for Britain of 1.31-4.21 per cent of GDP but for the EU of only 0.11-0.52 per cent of GDP.

The political impact will be dramatic, with northern Europe losing 12 per cent of its voting power in the European Council

The economic impact will not be uniform across Europe. Countries with close historical or geographical links with Britain will be most affected; these include Ireland, the Netherlands, Belgium, Malta and Cyprus.

Britain’s departure will also affect the balance between economically liberal member states and those that are more protectionist and more sceptical of global trade deals. An analysis of by the think tank Open Europe of voting patterns in the council found that the southern protectionist bloc (including France, Italy, Spain, Greece, Portugal and Cyprus) and the northern liberal bloc (including Britain, Germany, Sweden, Denmark, the Netherlands, Finland, Ireland and the Baltics) each has a blocking minority under the qualified majority voting system.

The European Parliament, where 60 per cent of Britain’s 73 MEPs are on the right, is likely to shift to the left, so that centre-left and left parties could form a majority against the centre-right European People’s Party. These shifts in the council and the parliament will create challenges for Ireland on issues such as tax harmonisation, where the forces opposing a more coherent EU approach will be weakened.

The loss of the biggest and most economically powerful member state outside the euro zone will increase pressure on the remaining eight non-euro zone member states. Some are likely to accelerate plans to join the currency union as they become more exposed to decisions taken by the euro zone on issues such as banking.

Without British intransigence to hide behind, Ireland will need new allies who share the country’s lack of enthusiasm for further integration

Among the commonly predicted consequences of Brexit that has so far failed to materialise is a contagion effect, with other member states seeking to follow Britain out of the EU. Brexit has instead – perhaps in conjunction with the election of Donald Trump in the United States – appeared to halt the march of the eurosceptic, xenophobic right across Europe. In Austria, the Netherlands and France, the far right has been defeated at the polls and in Germany, the xenophobic Alternative für Deutschland has seen its support collapse to 7 per cent, just above the 5 per cent hurdle for winning seats in the Bundestag.

The election of Emmanuel Macron in France and the success of pro-EU parties in the Netherlands could instead presage a renewal of interest in further political integration in Europe. Without British intransigence to hide behind, Ireland will need new allies who share the country’s lack of enthusiasm for further integration.

Another political challenge for Ireland may lie in a renewed push to strengthen common European defence structures, which Britain has resisted. Macron and German chancellor Angela Merkel are likely to make strengthening Europe’s common defence a shared priority as they restore the Franco-German relationship to its leadership role in Europe.

Brexit coincides with two other factors that strengthen the impetus towards greater defence co-operation: the deteriorating security situation on Europe’s eastern borders and Donald Trump’s election as US president. Trump’s unreliability, his lukewarm support for Nato and his undisguised hostility towards his European allies has persuaded Paris and Berlin that Europe must prepare to take more responsibility for its own defence. This is likely to mean bigger defence budgets as well as more integrated EU security and defence structures, including an EU military headquarters.

If the EU continues to prioritise Ireland’s specific concerns during Brexit negotiations for the next two years, they will expect some reciprocity

There is nothing in the EU’s current policies that compel Ireland to participate in any activities that are incompatible with the Government’s interpretation of the country’s policy of neutrality. But if the commission, the parliament and the other member states continue to prioritise Ireland’s specific concerns during Brexit negotiations for the next two years, they will expect some reciprocity. This may not require a greater commitment to European defence, but Ireland’s European partners may expect a greater willingness from Ireland to subordinate its interests on issues such as tax policy to the common European good.