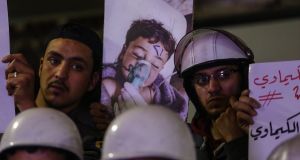 Postmortem results have confirmed that chemical weapons were used in an attack which killed at least 72 people in Syria’s Idlib province, after US president Donald Trump warned that the strike had changed his view of the Syrian leader, Bashar al-Assad.

Three Syrians who were injured in Tuesday’s attack on Khan Sheikhun died in Turkey after being brought to the southern province of Adana for treatment. “The results of the autopsy confirms that chemical weapons were used,” justice minister Bekir Bozdag told the state-run Anadolu news agency.

The postmortems were conducted by officials from the World Health Organization in Adana, along with officials from Organisation for the Prohibition of Chemical Weapons, Mr Bozdag said.

The wounded had been brought from Idlib through Turkey’s Cilvegozu border gate for the treatment in the Reyhanli district of Hatay province.

The postmortem results add to mounting evidence that the attack, which killed 72 people and injured 300 others, involved deliberate use chemical weapons by a Syrian warplane. Aid agencies, including MSF and medics in Turkey, said patients showed clear symptoms of exposure to the nerve agent sarin.

Syria and its ally Russia claim that a depot used by opposition groups to store a nerve agent had been inadvertently bombed. Such an explanation has been dismissed as “fanciful” by experts, as sarin stores would be destroyed if hit.

On Wednesday, Mr Trump accused Mr Assad’s government of going “beyond a red line” by conducting the attack which he said was an “affront to humanity”.

Speaking in the White House Rose Garden, Mr Trump said: “I will tell you that attack on children had a big impact on me - big impact. My attitude toward Syria and Assad has changed very much. . . You’re now talking about a whole different level.”

When asked whether he would consider military intervention to remove Mr Assad, Mr Trump said: “I’m not saying I’m doing anything one way or another, but I’m certainly not going to be telling you. . . Militarily, I don’t like to say where I’m going and what I’m doing.”

The US ambassador to the United Nations, Nikki Haley, has also warned Russia it “cannot escape responsibility” for the attack.

Displaying pictures of children killed in the attack at the UN in New York, she suggested that if the UN fails to respond to the atrocities the United States may act to stop further chemical attacks by the Assad regime.

Rescue workers have gathered soil samples from the scene of the attack and sent them to western intelligence officials to determine precisely what nerve agent was used.

Witnesses said at least one Syrian warplane dropped bombs on Khan Sheikhun at about 6.30am on Tuesday. Shortly afterwards, first responders were overwhelmed with patients suffering from acute breathing problems, foaming at the mouth and writhing in pain.

The Syrian American Medical Society said it had treated victims with identical symptoms.

Amnesty International said it had interviewed a nurse who was working at the Rahma hospital when the attack happened. “The sound of the explosion was not what we are used to,” the nurse said. “My colleagues and I thought that this one hadn’t exploded, because of the thump sound it made, not an explosion sound.

“A few minutes later, around 6.35am, the first victims were brought in, and then the flow just kept going until 9am. There was a huge number of people and aides being brought in, and there were only four of us medics at the hospital at the time, and one of us also got infected.”