Palestinian leader Abbas ends security agreement with Israel and US 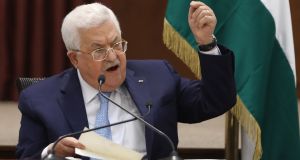 Palestinian president Mahmoud Abbas: Declaration could lead to the end of intelligence sharing between Palestinian, Israeli and US security services. Photograph: Alaa Badarneh/Pool/AFP via Getty Images

The Palestinian leader, Mahmoud Abbas, has declared an end to security co-operation with the Israel and the United States, citing the imminent threat of Israeli annexation of parts of the West Bank.

“The Palestine Liberation Organization [PLO] and the state of Palestine are absolved, as of today, of all the agreements and understandings with the American and Israeli governments and of all the commitments based on these understandings and agreements, including the security ones,” Mr Abbas said in his speech.

The PLO voted to end co-operation with Israel and the US in 2018 and left it up to Mr Abbas when to implement such a move. The Palestinian Authority (PA) president has threatened to stop such co-operation several times before, and it was unclear on Tuesday what his declaration would mean in practice, especially in terms of the future of the Palestinian security apparatus.

“To pass the bar of credibility as a threat, to show this is not the same as the umpteen threats that they’ve previously issued of a similar nature and that they never acted on, the bar is very high,” said Daniel Levy, the president of the US/Middle East Project. “We will actually have to see Palestinian action.”

Some reports from Israel suggested that Palestinian security officials had been ordered to stop talking to their Israeli counterparts. But Palestinian officials have to co-ordinate with Israeli officers even to move between areas within the West Bank.

Mr Abbas’s declaration follows the creation of a new Israeli government which is officially contemplating annexation of some areas of the West Bank, apparently with the support of the Trump administration.

“I do think this moment is qualitatively different than any other moment in the past, and that’s because Israel does look like it is prepared to annex some part of the West Bank,” Zaha Hassan, a human rights lawyer and visiting fellow at the Carnegie Endowment for International Peace, said.

“Not only is there nobody to stop Israel from moving forward, but also the US is a partner to this plan.”

According to Israeli Channel 13 television, the Israeli ambassador to the US, Ron Dermer, had been urging annexation before the US elections in November.

“We must advance annexation now because we don’t know what will happen in the US presidential elections. [Democratic candidate Joe] Biden could win,” Mr Dermer is reported to have said in confidential briefings in Washington.

“There is a window of opportunity now, so it must be done now.”

Jordan’s King Abdullah warned on Saturday that Israeli annexation could lead to “a massive conflict” between his country and Israel and did not exclude a suspension of the 1994 peace treaty between them.

Mr Abbas’s declaration could lead to the end of intelligence sharing between Palestinian, Israeli and US security services. But it gave no hint of what Palestinian forces would do, when Israeli soldiers carry out incursions into Palestinian areas, or what it would mean for Palestinian movement around the West Bank between parts entirely administered by the PA (Area A), jointly run areas (B) and Israeli settlement zones (Area C).

“What does it mean on the ground for PA security who – even to travel from area B to area B, through Area C – have to get permission from the Israeli army. Does that mean that if everything is frozen, that PA security can’t access certain parts of Area B,” asked Khaled Elgindy, a fellow in the centre for Middle East policy at the Brookings Institutions.

“These are the kinds of questions that I think Palestinians will be asking, and then the Israelis, but I’m not sure there are clear answers.” – Guardian