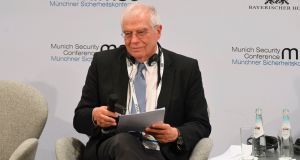 EU foreign policy chief Joseph Borrell: he said Israel would be the “most important item on the agenda” when EU foreign ministers meet this week. Photograph: Getty Images

EU states are set to address differences among them over how to respond to proposals by Israeli prime minister Benjamin Netanyahu to annex large parts of the West Bank – a move that risks an explosive escalation in the Israeli-Palestinian conflict.

The annexation plan is included in the coalition deal agreed between Mr Netanyahu and his former rival Benny Gantz, which has secured Israel’s longest-serving premier a fifth term in office. The new government is to be sworn in this week.

Diplomats say France, backed by Belgium, Ireland and Luxembourg, is urging member states to threaten punitive economic measures if Israel extends sovereignty to Jewish settlements and the Jordan Valley in the West Bank, which has been occupied by the Israeli military since a 1967 war.

EU foreign policy chief Joseph Borrell told reporters that the matter would be the “most important item on the agenda” when foreign ministers meet by video conference on Friday.

“You know everything in foreign policy requires unanimity, especially sanctions,” Mr Borrell said. “So we are for the time being far away from discussing about sanctioning. But it’s important for me, for the European Union, for foreign policy, to know what is the position of the member states with respect to the respect of international law.”

Mr Netanyahu was emboldened to court the support of hardliners and make annexation a campaign pledge by the administration of US president Donald Trump, which announced a Middle East peace plan that gave US recognition of the settlements and Israeli sovereignty over the Jordan Valley in January.

Commentators say Mr Netanyahu could yet backtrack from his plans, but the prime minister, who leads of the right-wing Likud party, has said cabinet discussions will start on the issue in July.

This has provoked outrage from Palestinians and raised fears of a major escalation in the long-running conflict.

The EU has clout as Israel’s top trading partner: Israel enjoys trade preferences with the world’s largest trading block as well as being part of its multibillion euro research and innovation programme Horizon 2020.

But its members were split on how to respond the last time the issue was discussed, with Israel’s strongest allies such as Hungary and the Czech Republic blocking proposals for the bloc to take a harder line.

However, the prospect of annexation has alarmed even member states who are usually slow to react on the issue.

“This is a very divisive issue inside the council, and different member states have different positions,” Mr Borrell said.

“We noticed it when we discussed it a couple of months ago, and I suppose this divide is still there. So it will be a very interesting foreign affairs council [on Friday]” a commission spokesman said. “The member states are in the driving seat, and they decide what sanctions are appropriate.”