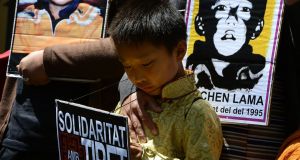 A pro-Tibetan vigil with pictures of Gedhun Choekyi Nyima outside the Chinese consulate in Barcelona, Spain. Groups have renewed calls on China to free the Tibetan identified as the Panchen Lama. Photograph: Getty Images

On the 25th anniversary of the abduction of the six-year-old Panchen Lama there have been widespread calls from the international Tibetan community and rights groups for China to release him and his entire family.

Twenty-five years ago on Saturday the six-year-old Panchen Lama, the second most senior figure in Tibetan Buddhism, was taken into custody by Chinese officials. Gedhun Choekyi Nyima and his family have not been seen in public since, and rights groups have called him “the world’s youngest political prisoner”.

In 1995, the Chinese government rejected the Dalai Lama’s candidate as “illegal and invalid”, and six months after his abduction Beijing announced it had found “the real reincarnation”, Gyaltsen Norbu, the son of two Communist Party members from Tibet. Most Tibetans reject Beijing’s candidate, and refer to him as the “Panchen Zuma”, or the “false Panchen”.

A petition signed by leaders of 159 Tibetan and human rights organisations from 18 countries urged Michelle Bachelet, the UN High Commissioner for Human Rights, to take up the case with Beijing, saying “the 25 years of enforced disappearance [was] a crime against humanity”.

Beijing’s appointee, who lives in Beijing and is a member of the Communist Party’s top advisory body, the Chinese People’s Political Consultative Conference, has made only a few public appearances in Tibet.

China keeps the location of the now 31-year-old abducted Panchen Lama a tightly-guarded secret, with officials only saying he is “healthy, enjoying his education, and does not want to be disturbed”.

Beijing has said that when the current Dalai Lama dies the atheist Communist Party will control his succession and choose the next spiritual leader.

The petition penned by the 159 organisations said China’s “meddling in the recognition of reincarnated lamas” was “destroying the foundations of Tibetan Buddhism”.

The 14th Dalai Lama has suggested he might appoint his own successor while he is still alive, possibly a girl for the first time, in an effort to stymie Beijing’s succession plans.