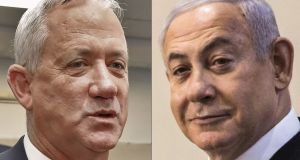 Israel’s new unity government is due to be sworn in on Thursday evening, following a deal made by rivals Benjamin Netanyahu and Benny Gantz to end a political deadlock that has dragged on for more than 500 days. Photograph: Emmanuel Dunand,Menahem Kahana/AFP via Getty Images

Israel’s new unity government is due to be sworn in on Thursday evening, following a deal made by rivals Benjamin Netanyahu and Benny Gantz to end a political deadlock that has dragged on for more than 500 days.

Under the power-sharing agreement, Mr Netanyahu, currently interim leader, will remain in the role for 18 months before handing over to Mr Gantz, a former army chief, for the remainder of a three-year term.

The new administration, the fifth headed by Mr Netanyahu, who is Israel’s longest-serving leader, is expected to be sworn in around 10pm on Thursday after a vote in the Knesset, the country’s parliament.

Mr Netanyahu’s Likud and Mr Gantz’s Blue and White parties released the joint policy principles of the new government on Wednesday, stating they would initially form an emergency cabinet to deal with the coronavirus before moving on to different matters.

Despite fighting three brutal elections within the space of a year, as well as multiple failed attempts to reach a deal, the two men agreed to join each other last month.

Mr Gantz, who entered politics two years ago primarily on the promise to oust Mr Netanyahu, argued the pandemic and the urgent need to end the political crisis meant it was time to put “personal scores aside”. Without a fully functioning government, Israel has been unable to pass a budget.

While he managed to break the stalemate, Mr Gantz saw his Blue and White party break apart with resentment that he had joined its nemesis, Mr Netanyahu, who faces three damning criminal corruption cases.

For Mr Netanyahu, the deal was a stunning turnaround after he appeared to be flagging in recent weeks under the strain of the charges, which he denies. He is now likely to remain in office throughout his upcoming corruption trial.

On Thursday, ministerial appointments were still been negotiated, although Mr Gantz will serve as defence minister before taking over as prime minister in November 2021.

The deal envisions a huge 32-minister cabinet, which will rise to 36 members in six months’ time – the largest in the country’s history – in part to accommodate the demands of multiple divergent parties within the coalition who have little in common.

Writing in the country’s top-selling newspaper, Yedioth Ahronoth, columnist Ben-Dror Yemini, said the new administration was “a far cry from being what most Israelis would consider to be their dream government”.

“It is inflated, it is wasteful, and it’s unclear if it has any ideology,” he wrote, before adding further down: “Nevertheless, we must wish this government success.” –Guardian