Spain makes masks compulsory in public, even for children 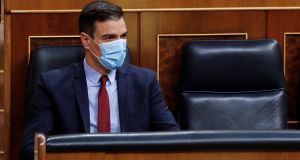 Spain has made it compulsory for all citizens, including children over six, to wear masks in public spaces as one of Europe’s strictest lockdowns gradually unwinds.

The Health Ministry order said the masks - whose efficiency in curbing the coronavirus is hotly debated globally - would be needed from Thursday for indoor public spaces and outdoors when impossible to keep a two-metre distance.

Spain has suffered 27,778 deaths and had 232,037 cases of Covid-19, according to latest data, while the tourism-dependent economy is forecast to contract up to 12.4 per cent in 2020 due its virtual paralysis since mid-March.

But the pace of new fatalities has slowed to under 100 a day, and prime minister Pedro Sanchez’s left-wing coalition is aiming to lift most of the lockdown by the end of June unless there is a second wave.

To keep control on the gradual phase-out of restrictions, which vary from region to region, the government is requesting a two-week extension of the state of emergency.

Some are getting weary of the restrictions: demonstrators of up to a few hundred have been gathering daily at 9pm to bang pots and pans and call for the government’s resignation. Mainly in wealthy, conservative neighbourhoods, the protesters have often ignored social-distancing rules.

Madrid has eased restrictions to allow children outdoors, and shops and beaches to reopen. But it is keeping a quarantine for overseas travellers for another two weeks.

“We have not got this far by inertia, but by the work of the health workers. The citizens, united, have bent the curve. No one has the right to waste what we have achieved together,” Mr Sanchez told congress, as his minority government tackled the increasingly hard task of getting support from other parties to extend the state of emergency. – Reuters