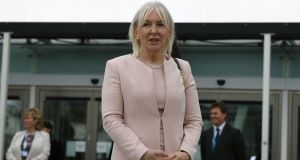 Downing Street has rebuked Conservative MPs, including a minister, for sharing a video from a far-right Twitter account that falsely claimed Labour leader Keir Starmer obstructed the prosecution of grooming gang members when he led the Crown Prosecution Service.

A Downing Street spokesman said the MPs, including Nadine Dorries, a health minister, had been spoken to by whips after sharing the misleading 22-second clip.

The video was shared by Ms Dorries as well as the Telford MP Lucy Allan and Maria Caulfield, who represents Lewes. All commented at what the video purported to show, with Ms Dorries calling it “revealing”.

The No 10 spokesman said: “These tweets have rightly been deleted. The MPs involved have been spoken to by the whips’ office and reminded of their responsibility to check the validity of information before they post on social media sites.”

The clip, from 2013, falsely claims to show Sir Keir apparently recounting reasons why victims of grooming gangs might not be credible, talking about “the assumption that a victim of child sexual abuse will swiftly report what’s happened to them to the police; will be able to give a coherent, consistent account, first time; that they will not themselves have engaged in any offending or other behaviour; and that they will not have misused drugs or alcohol at any stage”.

The original tweeter, who also regularly posts anti-Islam messages and other far-right content, titled the clip: “Keir Starmer explains why he didn’t prosecute grooming gangs when he was head of the Crown Prosecution Service.”

However, a fuller version of the video shows this is completely misleading. Sir Keir is in fact explaining why he had changed the prosecution guidelines, to move away from “a number of assumptions, which didn’t withstand scrutiny”.

Ms Allan wrote in her retweet: “This suggests a total failure to understand grooming, a dismissive attitude towards CSE [child sexual exploitation] victims and a belief that the victims brought it on themselves.”

Ms Caulfield retweeted the video with the message: “True face of the Labour leader #shameful.”

Speaking during an online event with Welsh voters, Sir Keir said: “As I understand it, it’s a doctored video that has been shared. I understand Nadine Dorries deleted it, which is the right thing to do. It’s doctored, it’s false, it’s not true.”

A Labour source said: “This is a doctored video tweeted by a far-right social media account. As a government minister, we hope Nadine Dorries acknowledges this and takes it down.”

Ms Dorries later did remove her tweet, as did Allan. However, Ms Allan did not delete an earlier reply to another tweet referencing the video in which the MP said: “Unbelievable. This is what CSE victims were up against.”

Ms Caulfield appeared to delete her entire Twitter account. None has yet apologised for sharing the misleading message.

As director of public prosecutions, Sir Keir ordered a wholesale restructuring of how the CPS dealt with grooming cases, saying the legal system had failed victims.

The issue of grooming gangs and authorities failing to properly target abusers has been regularly used by far-right activists such as Tommy Robinson to campaign against Muslims.

In 2017, Ms Dorries retweeted a post from Robinson. – Guardian