Already struggling to make ends meet, many Iranians have become more fearful about the future 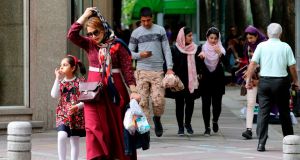 Iranians on Valiasr Street in northern Tehran earlier this week. Inflation in Iran is at about 40 per cent and the rial is down 60 per cent on the year. Photograph: Atta Kenare/AFP/Getty Images

Nasrin, an Iranian mother of two teenagers, starts to cry when she thinks of what the future could hold for her children. “I have been thinking of them night and day. How will they earn their living when they grow up?” she said, adding: “I am so scared of war that I’d rather not follow the news any more.”

Her comments come at the end of a tumultuous week for Iranians.

The 40-year-old housewife voiced her fears hours after President Hassan Rouhani said the Islamic Republic would stop complying with parts of the 2015 nuclear deal struck with world powers. The move raised the stakes in the regime’s stand-off with the Trump administration and is the Iranian president’s most confrontational stance yet.

This was followed on Thursday by European powers rejecting Iran’s “ultimatums” after Rouhani said Tehran would resume its commitments under the deal if the UK, France, Germany, Russia and China could find a mechanism for it to sell oil and handle banking transactions within the next two months.

The US deployment of an aircraft carrier strike group to the region, and the unscheduled visit of Mike Pompeo, US secretary of state, to neighbouring Iraq on Tuesday, added to concerns about an imminent conflict.

Already struggling to make ends meet as the economy contracts and inflation soars, many Iranians have only become more fearful about the future. “They have been telling us over the past five years that the nuclear agreement benefits the nation and now they are pushing us to point zero again,” said Nasrin.

While Rouhani’s speech rattled many ordinary Iranians, it played well with politicians, impatient with the US after the reimposition of sanctions and its unilateral withdrawal from the nuclear treaty last year.

“Mr Rouhani’s smart and diplomatic move has not only calmed down hardliners but has made reformists happy that Iran [has] put more pressure on Europeans without dragging the country into a war,” said Mohammad Ali Abtahi, a former reformist vice-president.

But if the European signatories to the nuclear accord fail to take action to mitigate the impact of the US withdrawal, Rouhani may yet face a backlash. There are still hardline forces – mainly based in the elite Revolutionary Guards and the judiciary – who say Iran should not have agreed the deal in the first place.

“Opponents of the government may be quiet now for the sake of national unity, but they are going to put this on the list of failures of Mr Rouhani who, in effect, confessed on Wednesday that the nuclear deal was not working,” said Mohammad-Sadegh Javadi-Hesar, a reformist politician. “Considering that Europeans will not be able to deliver anything tangible, hardliners will soon throw this failure into the government’s face.”

Rouhani’s handling of the nuclear issue could play a huge part in next year’s parliamentary elections, which in turn will influence the outcome of the 2021 presidential election. Key to Rouhani’s victories in 2013 and 2017 was his promise that the nuclear deal could offer a solution to Iran’s economic hardships.

With inflation at about 40 per cent and the rial down 60 per cent on the year, many Iranians are still struggling.

At least Rouhani’s speech offered some chance that things might change, said Azadeh, a 33-year-old beautician. “My immediate reaction to Rouhani’s speech was ‘great! We either go to a war or will negotiate with US’. This [current] level of uncertainty is unbearable,” she said. “We need to know where we stand and have stability to be able to make economic decisions for our life. I’m no fan of the Islamic Republic but don’t think Iran will go to war. Even if it happens, Revolutionary Guards can protect us.”

But others were more nervous. “I hope Iran’s decision will not lead to a war,” said Sheida, a 32-year-old hairdresser. “I’m really worried. I can tolerate all economic difficulties but cannot imagine living through a war.”

Roya, a 38-year-old masseur who works in a gym, doubted the government was willing to risk war. “People are not as devoted to the Islamic Republic as they were in the past, when they had fought in the [1980-88] war with Iraq,” she said. The government knew that “mothers like me are not going to send their sons to any war any more”, she added. – Copyright The Financial Times Limited 2019