Jewellery worth £50m stolen during raid on Ecclestone home 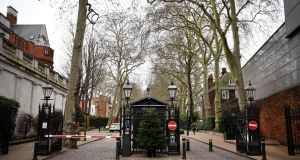 Tamara Ecclestone, the daughter of former Formula One boss Bernie Ecclestone, has had an estimated £50 million-worth of jewellery stolen in an audacious raid from her west London home.

A spokesman said the 35-year-old had been left “angry and shaken” after the burglars apparently evaded both the 24-hour security teams that patrol the street known as “Billionaire Row” and Ecclestone’s own internal security officers.

The daughter of Formula One’s former commercial supremo lives on Kensington Palace Gardens, amongst the residences of the French and Russian ambassadors and close to the Kensington Palace home of prince William and his wife Kate.

Police said a number of items of jewellery were stolen from a property in West London on Friday night and the suspects had fled the house by the time officers and a dog unit arrived.

The building’s security team had reported seeing three males inside the property.

The Sun newspaper reported that Ecclestone, a model and celebrity in Britain, had just left the country for her Christmas holidays when the burglars entered the property via the garden and smashed open safes hidden in her bedroom.

Ecclestone’s Instagram feed showed her young daughter boarding a private plane on Friday, with a message saying “Pretty excited the holidays are here.”

“I can sadly confirm there has been a home invasion at the Ecclestone-Rutland family home,” a spokesman said, referring to her husband Jay Rutland.

“Tamara and family are well but obviously angry and shaken by the incident.”

The average property price for the street stands at £36.5 million, according to online portal Zoopla. – Reuters