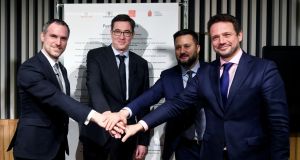 The leaders of the so-called Visegrad Four countries have ganged up against Brussels on issues including immigration, climate change and the rule of law. They are now facing a new kind of opposition from within: the mayors of their own capitals.

On Monday, the mayors of Budapest, Prague, Warsaw and Bratislava met in the Hungarian capital to sign a “Pact of Free Cities”, vowing to work together in defence of a pro-EU urban electorate standing against socially conservative national governments and in favour of green policies.

“Cities have always stood up for solidarity and values,” Budapest green mayor Gergely Karacsony, who was elected in October, said during a preparatory meeting with two of the other mayors. “We are going to make Budapest a bridgehead towards Europe. ”

In a show of defiance, the mayors met on Monday in the former campus of the Central European University founded by billionaire Hungarian-American philanthropist George Soros, and which Hungary’s nationalist prime minister Viktor Orban shut down last year.

The initiative could help change the image abroad of the four central European countries, say analysts. It echoes the green push at city and state level in the US aimed at countering President Donald Trump’s decision to leave the Paris climate accord designed to curb carbon emissions.

“The alliance of progressive cities can definitely project a more nuanced image of the Visegrad Four as a region,” said Zselyke Csaky, research director at US-based watchdog Freedom House. However, it could serve to exacerbate the domestic urban-rural divides, “which might not benefit the parties in national elections”, she added.

The four mayors would advocate a pro-EU agenda at home and “city-tailored solutions” in Brussels, in areas including the environment, employment and the economy, said Mr Karacsony, who declared a “state of climate emergency” in his city.

They hope their initiative will be welcomed in Brussels at a time when their countries block EU policies and cause controversy over the rule of the law.

“We have difficult governments but we are very much committed to European values, to democracy, openness and freedom. We’ve all fought for inclusiveness of our cities,” said Warsaw mayor Rafal Trzaskowski. “In [these] difficult days when some of our governments are turning lukewarm towards European integration, we need a strong signal that when it comes to local government and strong cities, we want to do something together.”

At an EU leaders meeting in the Belgian capital last week, coal-dependent Poland, Hungary and the Czech Republic pushed back against plans by European Commission president Ursula von der Leyen for EU-wide carbon neutrality by 2050.

Poland and Hungary are also facing so-called Article 7 procedures for alleged breaches of the rule of law. Poland is under fire over a series of judicial changes and Hungary over laws on the judiciary, media and foreign universities. Both countries have vowed to veto any sanctions that would affect the other, however.

Hungary and the Czech Republic have been under scrutiny for potential misuse of EU funds. The Hungarian government agreed to return €1.5 billion in EU money – or 10 per cent of the funds it was allocated between 2014 and 2020 – because of mismanagement. The amount is worth 2 per cent of Hungary’s annual economic output.

Meanwhile, Czech prime minister Andrej Babis is under pressure following media reports that the commission wants the country to return EU subsidies after an audit concluded he had a potential conflict of interest. Mr Babis has denied wrongdoing.

The progressive mayors want Brussels to help them bypass their national governments and channel funds directly to their cities, rather than having them disbursed at a national level. The commission was favourable, they insisted: it had included the proposal of direct disbursements in its recommendations for the next budget cycle, Mr Trzaskowski noted.

In Hungary, opposition mayors are also uniting countrywide. Last week, the leaders of 10 opposition-led cities agreed to create a formal platform to co-operate and share experiences.

There are signs that mayoral alliances are perceived as a serious political threat: Hungary’s ruling coalition approved legislation last week restricting the power of municipalities and opposition parties in parliament.

“If we are successful in our cities, this could be a new impulse for the liberal powers in all our countries,” said Prague mayor Zdenek Hrib, of the Pirate party. “And if we prove that we are able to solve this in co-operation with these parties ... I believe that this will show that we can solve it on a national level.” – Copyright The Financial Times Limited 2019