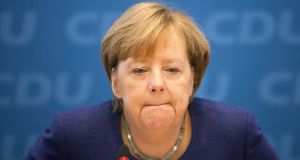 Given Berlin’s traditional post-election go-slow, however, it will be weeks before a new government is elected and gets down to work.

All parties are agreed on fast-track spending for education and digital infrastructure. But huge differences loom on public spending, energy, immigration, climate protection and housing.

Bridging the many ideological gaps is not the only challenge ahead for Merkel. After 12 years in power, and almost 17 years as party leader, her previously unquestioned leadership is now under fire.

In the past weeks Merkel and her allies have blocked any serious election postmortem, with the German leader saying she “cannot see what we should do differently”. That has infuriated – and motivated – a younger generation of CDU politicians to question in public for the first time Merkel’s continued authority as leader.

Among the critics is CDU politician Sven Rissmann, a rising star in the party’s Berlin branch, who bemoans the “degeneration” of the party under Merkel into a bloc that “applauds the chancellor unconditionally”.

The criticism has been catalysed by the rise of the far-right Alternative für Deutschland (AfD), taking its seats on Tuesday in the Bundestag after polling nearly 13 per cent with policies that mix old CDU conservatism with far-right and anti-Islamic populism.

Other young CDU Merkel critics have been energised by the election victory of Austria’s Sebastian Kurz, and his neoconservative politics, as a model to outflank populists and win elections.

While Kurz has taken a hard line on migration, Merkel’s critics in the CDU accuse their leader of misjudging the public mood on refugees, the final straw for conservative voters feeling neglected in their party’s shift to the political centre.

Alexander Mitsch, head of a new conservative grouping within the party, complains that Merkel and her loyalists have “smothered” every attempt to discuss the party’s shift to the centre in recent years. “Even after this election result, the worst since 1949, the party leadership is clearly not ready to correct anything,” he said on national radio on Monday.  “That means we need a new leader.”

While the succession stakes are only getting started, CDU conservative Jens Spahn is already bringing himself into position as a Merkel successor.

The 37-year-old is a close ally of Sebastian Kurz, attending his election-night party in Vienna, and has urged his party to work fast to win back more than one million CDU voters who defected to the AfD a month ago.

“We have to make clear that, with us, there is a state that delivers security, order and justice with no ifs or buts,” said Spahn, demanding greater efforts to deport criminal asylum seekers and refugees.

Almost a year after an Islamist attack on a Berlin Christmas market that left 13 dead, the mood towards migrants has cooled significantly around Germany. This month an 18-year-old failed asylum seeker from Chechnya, due to be deported, was arrested in connection with the brutal killing of a 60-year-old Berlin woman for €50 and a mobile phone.

All eyes on Tuesday will be on the arrival of the Bundestag debutantes, the AfD. Its leaders are anxious to put behind them incendiary election rhetoric, and are hopeful a series of high-level departures will demonstrate they can be a constructive force in parliament.

Many Germans remain unconvinced, however, and 12,000 people protested at the weekend in Berlin against the AfD’s Bundestag debut. Tuesday may see some wrangling over the party’s candidate for a deputy speaker position, following fights over where they will be seated in the chamber.

With 709 seats, 111 more than usual because of electoral law peculiarities, this is the largest Bundestag ever, putting MP office space at a premium. Members of the liberal Free Democrats are furious twice over: not only have they been forced to sit beside the AfD in the Bundestag, they also have to share office space with them in a Nazi-era building.

Keeping parliamentarians in line today will be Wolfgang Schäuble, set to be elected as Bundestag president. The 75-year-old was complimented out of the finance ministry after two terms by Merkel, anticipating a claim on the post by the Free Democrats.

Mission accomplished, the image-conscious Free Democrats leader Christian Lindner insists now he is less interested in the job than in rebranding the coalition-to-be.

The potential CDU-FDP-Green coalition has been dubbed the “Jamaica” alliance, matching coalition party colours to the Caribbean island flag. Lindner, however, prefers “shamrock”.

If that isn’t an opening for Taoiseach Leo Varadkar next March...