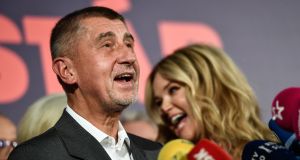 Andrej Babis, Slovak-born billionaire and leader of the Ano movement, with his wife Monika after the first results of Czech parliamentary elections in Prague. Photograph: EPA

The populist Ano party of Czech billionaire Andrej Babis has started talks on forming a new coalition government, after dominating parliamentary elections that brought a sharp shift towards right-wing and “anti-establishment” parties.

Ano took 29.6 per cent of votes – almost three times more than any of its rivals – to secure 78 of the 200 seats in parliament, but legal problems facing Mr Babis could hinder his hopes of becoming his country’s next prime minister.

Czech prosecutors this month charged the tycoon with illegally accessing some €2 million in European Union funds and a court in Slovakia, where he was born, annulled previous rulings that cleared him of collaboration with the communist-era security services.

Mr Babis (63) denies the allegations which he says are a smear campaign by the Czech elite, but most other parties have at one time or another pledged not to work with him while he faces prosecution.

The coalition talks may change their minds, or prompt Mr Babis to nominate an Ano colleague to be premier.

The ex-finance minister’s legal travails did his party little harm in voting on Friday and Saturday, as Czechs appeared to give him credit for the country’s strong economy and backed his Euroscepticism and opposition to immigration.

Ano beat pre-election predictions to finish well ahead of the centre-right Civic Democrats on 11.3 per cent and the Pirate Party on 10.8 per cent.

The Pirates, who want to modernise and clean up the Czech economy through digital innovation and e-governance, will enter parliament for the first time along with the fourth-placed, far-right Freedom and Direct Democracy party (SPD), which took 10.6 per cent of ballots.

The biggest losers in the election were the ruling Social Democrats, whose support plunged to just 7.3 per cent, and the Communists who fared marginally better with 7.8 per cent of votes.

As he declared victory, Mr Babis said Ano would talk to all parties about the composition of the next government, but insisted he did not want to join forces with the SPD or the Communists.

He also sought to play down predictions that he may take the Czech Republic in the direction of Poland and Hungary, which regularly clash with the EU over issues ranging from refugee resettlement to their governments’ alleged attacks on the rule of law.

“I would be grateful if some people would stop being afraid that we are oriented to the east,” he added, suggesting he would not join Czech president Milos Zeman in strongly advocating a rapprochement with Russia.

Czech political analyst Jiri Pehe said Mr Babis’ opponents hoped to form a coalition without Ano, but its dominant victory had probably made that impossible.

“It is difficult to imagine that the Czech Republic could be headed by a prime minister who faces criminal charges.”