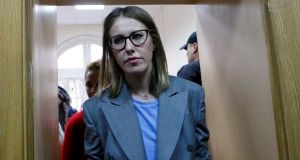 “I have no political weight, and I haven’t earned the right to launch some kind of political programme or stand as a candidate,” said Ksenia Sobchak, in what might be the most tepid sentiment ever used to launch a presidential campaign.

Speaking after declaring she wants to run in Russia’s presidential election in March, Sobchak admitted she had little chance of winning and had no political party or programme except to act as a lightning rod for all those dissatisfied with the political order under the president, Vladimir Putin.

Putin has not yet officially announced his candidacy but is expected to stand and win easily. Sobchak described her entrance into the fray as a call to action, but it is seen by many as a Kremlin-backed spoiler move intended to inject a veneer of competition and legitimacy into the vote. The more radical opposition politician Alexei Navalny is likely to be kept off the ballot.

Sobchak (35) is the socialite daughter of Anatoly Sobchak, who was Putin’s boss as mayor of St Petersburg during the 1990s. In the 2000s, Sobchak became a reality television presenter but, since 2011, she has been active in politics, often criticising the authorities.

Sobchak said the elections were unfair, but it was important to use opportunities to express discontent, rather than simply stage a boycott.

In order to get on the ballot, Sobchak will need to collect 300,000 signatures in support from ordinary Russians, something she will struggle to accomplish at short notice without Kremlin support. Her candidacy recalls that of oligarch Mikhail Prokhorov, who stood against Putin in 2012 on a vaguely liberal platform and won 8 per cent of the vote. It was widely reported at the time that Prokhorov had been encouraged to run.

Sobchak admitted she met Putin recently, as part of an interview for a documentary she is making about her father, but said the president did not ask her to run, nor did she seek his permission. She merely informed him that she had decided to stand, she said. “I thought it was the right thing to tell him to his face that I plan to stand against him,” she said.

Few are convinced by this but, even if true, it seems Putin gave his approval to her planned candidacy. Before Sobchak had made her announcement, his spokesman Dmitry Peskov expressed a positive attitude about her potential participation, in sharp contrast to comments about Navalny or other opposition politicians.

Sobchak says the speculation is all a dastardly plot to discredit her: “The authorities have decided to suffocate me with affection. It’s a very clever tactic. They’re doing everything to make it look like we’re together.”

During the 2012 campaign, Prokhorov was extremely careful not to criticise Putin directly. Sobchak is at least a little more strident on that front: while she said she respected Putin as a person due to the relationship he had with her father, she pointed out she had been a sharp critic of his domestic and foreign policy since 2011. “I think he has brought the situation in the country to a stage of absolute decline and absurdity,” she said.

Navalny is currently serving the latest in a series of short jail terms he has received for calling people to attend “unsanctioned protests” as part of a presidential campaign he has mounted despite having little chance of getting on the ballot. He is barred from standing due to his criminal record, acquired in a case most observers believe was politically motivated.