US prosecutors have charged more than a dozen Russian individuals and entities for allegedly interfering in the 2016 US presidential election. The charges include conspiracy to commit wire and bank fraud and aggravated identity theft. Video: Reuters 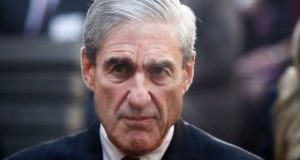 US president Donald Trump acknowledged on Friday that Russia launched an anti-US campaign ahead of the 2016 election, but in a message on Twitter sent after Special Counsel Robert Mueller charged more than a dozen Russians with meddling in the election, Mr Trump said his campaign did nothing wrong. “Russia started their anti-US campaign in 2014, long before I announced that I would run for President. The results of the election were not impacted. The Trump campaign did nothing wrong - no collusion!” Mr Trump said in a tweet.

US prosecutors have charged more than a dozen Russian individuals and entities for allegedly interfering in the 2016 US presidential election.

The indictment released named 13 individuals and three entities, accusing them of conspiring to defraud the US by “interfering with the US political and electoral processes, including the presidential election of 2016”.

The alleged interference ran from 2014 until the present, according to the court document. The defendants are accused of concealing their identities and using various methods, including social media, to interfere with the election, “primarily intended to communicate derogatory information about Hillary Clinton, to denigrate other candidates such as Ted Cruz and Marco Rubio, and to support Bernie Sanders and then-candidate Donald Trump”.

The charges include conspiracy to commit wire and bank fraud and aggravated identity theft. They came from the office of Robert Mueller, the US special counsel appointed last year to investigate alleged Russian interference in the election.

The US intelligence community concluded more than a year ago that Russian president Vladimir Putin authorised a cyber campaign to interfere in the US election to help Mr Trump win.

Russia started their anti-US campaign in 2014, long before I announced that I would run for President. The results of the election were not impacted. The Trump campaign did nothing wrong - no collusion!

Mr Trump has never accepted that conclusion, and has continued to attack the Russia probe, which is also looking into potential campaign collusion with Moscow and obstruction of justice by the US president.

The indictment was the first detailed look at the Russian firms and individuals alleged to have interfered in the election. It accused Internet Research Agency and its associates of posing as Americans and creating false US personas to help them run social media pages designed to attract US audiences.

It said the defendants procured and used computer systems in the US that helped them “hide the Russian origin of their activities to avoid detection by US regulations and law enforcement”.

Among the 13 individuals named by Mr Mueller was Yevgeny Prigozhin. Mr Prigozhin has been nicknamed “Putin’s chef” in Russian media reports, due to his catering company having worked on multiple contracts for the Kremlin, including a 2002 state dinner in St Petersburg with Vladimir Putin and George W Bush.

Russian media outlets have identified Mr Prigozhin as the financial backer of a Russian “troll” factory in St Petersburg, which inundated social media sites and US publications’ comments sections, with commentary that promulgated Kremlin viewpoints and spread disinformation.

According to the justice department, people working for organisations funded by Mr Prigozhin used “the stolen identities of real US persons” to post on social media accounts. Over time, that became a means “to reach significant numbers of Americans for purposes of interfering with the US political system, including the presidential election of 2016”, the department said.

Russia’s ability to create fake personas to push incendiary political messages across social media has put a harsh spotlight on Facebook and Twitter’s ability to control what happens on their platforms.

Both Democratic and Republican members of Congress have accused the social media companies of being too lax in their policing of the users of their services. Criticism from Washington has thrown the companies on to the defensive, prompting promises of change from the companies – led by Facebook founder Mark Zuckerberg – as they seek to combat perceptions that they have become bad for democracy. – Copyright The Financial Times Limited 2018 and Reuters