US President Donald Trump said on February 20th that he had signed a memorandum directing the attorney general to draw up regulations banning devices that turn "legal weapons into machine guns," like the bump stock used in October's mass shooting. 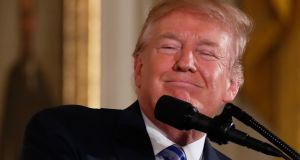 US President Donald Trump has directed the US Justice Department to ban gun modifications that turn legal firearms into machine guns, a move that has already been approved by the National Rifle Association (NRA).

So-called “bump stocks” were used in the October 2017 massacre in Las Vegas that left 58 people dead.

In the aftermath of that massacre, Mr Trump and other Republicans said they were open to banning the devices that help convert semi-automatic rifles into automatic weapons.

But there had been no movement on the issue, even though it received the rare support from the NRA, until today.

Meanwhile, actor George Clooney has announced he and his wife, human rights lawyer Amal Clooney, will donate half a million dollars to students organising protests against gun violence in the US, saying “our children’s lives depend on it”.

He praised the “courage and eloquence” of the survivors of the Florida school shooting that killed 17.

Students have turned activists in the wake of the Stoneman Douglas High School atrocity and have led calls for stricter gun controls in the country where school shootings have become routine.

In a statement, George Clooney said he and his wife would make the donation to next month’s March For Our Lives in the names of their eight-month-old twins, Ella and Alexander.

“Amal and I are so inspired by the courage and eloquence of these young men and women from Stoneman Douglas High School,” he said.

“Our family will be there on March 24th to stand side by side with this incredible generation of young people from all over the country, and in the name of our children Ella and Alexander, we’re donating 500,000 dollars to help pay for this ground-breaking event.”