Denis Staunton: Acknowledgment that much will have to remain the same is important 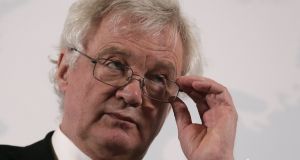 British secretary of state for exiting the European Union David Davis was speaking in Vienna on Tuesday. Photograph: Heinz-Peter Bader/EPA

David Davis’s speech in Vienna on Tuesday was an extraordinary hymn to supranational regulation from a veteran Eurosceptic who is in the vanguard leading Britain out of the EU. He reeled off all the areas where Britain was ahead of the EU in imposing regulation, including safety at work, flexible working hours and greenhouse gas emissions.

He said that, far from lowering standards after Brexit, Britain would use its freedom from EU rules to impose more demanding regulation on its own economy. And he called for state aid rules and other elements of the EU’s powerful competition regime to continue to apply to both Britain and the EU after Brexit.

Business groups and the financial services lobby welcomed the speech as an acknowledgement that British business has no interest in diverging from EU or other international regulations. And as Conservative Remainer Nicky Morgan pointed out, most regulation now comes from global regulatory bodies, and is applied by nation states or regional blocs like the EU.

Nonetheless, as Theresa May continues her crablike progress towards articulating what kind of Brexit she wants, Davis’s acknowledgment that much will have to remain the same is important. Environment secretary Michael Gove sounded a different note when he spoke to the National Farmers’ Union on Tuesday, complaining that EU state aid rules had blocked vital investment in infrastructure such as high-speed broadband.

Davis’s speech recognises the important political fact that there is little appetite for the kind of deregulation dreamt of by the more buccaneering Brexiteers. The clue lies in the slogan “taking back control”, which sold Brexit to millions of voters who wanted more regulation of immigration and more government spending on health and education.

The problem for the Brexiteers is that, if radical deregulation is ruled out, the potential competitive advantage of leaving the EU is diminished. And for all Davis’s brave talk about mutual respect between Britain and the EU, regulatory alignment after Brexit is likely to be on European terms.

Most hard Brexiteers on the Conservative backbenches reacted quietly to Davis’s speech. They may not be quiet for long.