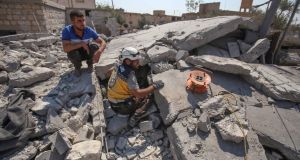 Members of the Syrian Civil Defense search for victims at the site of a reported air strike on the village of Deir Sharki on the eastern outskirts of Maaret al-Numan in Syria’s northern province of Idlib on Saturday. Photograph: Abdulaziz Ketaz/AFP/Getty 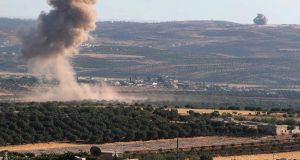 Air strikes have resulted in the deaths of more than two dozen civilians in northwestern Syria in the last two days in an escalation of a Russian-backed offensive against the last major rebel stronghold, a war monitor and local activists said on Saturday.

An air strike in the village of Deir Sharki killed seven members of one family, most of them children, on Saturday, the Syrian Observatory for Human Rights (SOHR) said. Another seven people were killed by bombardments in other areas, it said.

On Friday, air strikes in the village of al-Haas killed 13 people. The dead included a pregnant woman and her unborn baby, local activists and the rights group said. They had been seeking shelter after fleeing another area.

The bombardment forced a wave of people to flee northwards from the targeted areas, the group and local activists said.

“They are bombing the towns and their outskirts to push people to flee,” SOHR director Rami Abdulrahman said, adding that hundreds of families had been uprooted from areas that had so far largely been spared in the almost four-month offensive.

The Syrian state news agency Sana said the army was continuing operations against “the terrorist organisations in rural Idlib” and had widened its area of control around the rebel-held town of Khan Sheikhoun, currently a focal point of the offensive.

Russia and Syria have said their forces are not targeting civilians but militants, including the Nusra Front, a jihadist group known today as Hayat Tahrir al-Sham.

Ahmad al-Dbis, safety and security manager for the US-based Union of Medical Care and Relief Organizations, which supports medical facilities in the northwest, said the bombardment had widened into populated areas where there were no military positions.

“They are being targeted to drive the people towards forced displacement,” he told Reuters.

Dbis said the number of civilians killed by government or Russian forces stood at more than 730 since late April. The UN Office for the Coordination of Humanitarian Affairs has said more than 500 civilians have died in hostilities.

The northwestern region including Idlib province is part of the last major foothold of the opposition to President Bashar al-Assad.

The government advance towards Khan Sheikhoun threatens to encircle the last remaining pocket of rebel-held territory in neighbouring Hama province.

France called on Friday for an immediate end to the fighting, in particular condemning air strikes on camps for the displaced.

The upsurge in violence has already forced hundreds of thousands of people to flee towards the border with Turkey, which backs some of the rebels in the northwest and has its own troops on the ground in the area.

The National Army, a Turkish-backed Syrian rebel force based north of the city of Aleppo, said technical problems had prevented it sending reinforcements to help the Idlib rebels, as it had promised on Friday. – Reuters