Explainer: What now for the Jeffrey Epstein investigation? 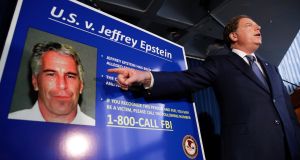 US attorney for the southern District of New York Geoffrey Berman (right) points as he speaks during a news conference about the arrest of American financier Jeffrey Epstein in New York on July 8th. Photograph: Jason Szenes/EPA

Who was Jeffrey Epstein?

Jeffrey Epstein, who was found dead in his prison cell on Saturday morning, was a 66-year-old finance executive. His glittering array of contacts and immense wealth made him one of the most recognisable faces on the US social circuit through the 1980s and 1990s.

In 2007, however, he was convicted by a Florida court of soliciting prostitution following allegations that he paid a 14-year-old girl for sexual favours.

Epstein ultimately avoided federal prosecution and pleaded guilty to lesser state charges. He was sentenced to 13 months in prison, but spent most of the time on day release. On July 6th this year, Epstein was arrested by police as he landed in the United States on his private plane from Paris. Federal prosecutors accused him of recruiting young women and girls between 2002 and 2005 to perform sex acts on him at his homes in New York and Florida.

The fresh arrests renewed focus on the original Florida conviction and the perceived leniency of the sentence. Alexander Acosta, Donald Trump’s secretary of labour, was forced to resign last month over his involvement in the original case, which took place when he was US attorney for the southern district of Florida.

Why is he of interest?

Epstein had strong political and social connections, including with current and former presidents. Since his arrest last month, footage has emerged of Donald Trump and Epstein partying with groups of women at Trump’s Mar-a-Lago estate in the 1990s. Another photo shows Trump and his future wife Melania alongside Epstein. Trump described Epstein as a “terrific guy” in a 2002 interview, adding: “He’s a lot of fun to be with. It is even said that he likes beautiful women as much as I do, and many of them are on the younger side.”

But Trump has distanced himself from the financier more recently, telling reporters last month that he had fallen out with Epstein some years ago, in what is believed to have been a property dispute.

Other contacts included Britain’s Prince Andrew, who was named in court documents unsealed last Friday related to a case taken by Virginia Roberts Giuffre. Giuffre, who says she was recruited by Epstein while working at Mar-a-Lago, also names former Northern Ireland special envoy George Mitchell in the deposition. Mitchell has strenuously denied the allegations.

Does Epstein’s death mean the end of the investigation?

Epstein’s alleged victims have expressed dismay that he will not face justice. However, the US attorney for the southern district of New York said that the investigation “remains ongoing”. Speaking on Saturday, Geoffrey S Berman noted that the indictment included one count of conspiracy, prompting speculation that the investigation will shift to his associates.

This was echoed by attorney general William Barr on Monday, who warned that the case will continue against “anyone who was complicit with Epstein”.

Among possible persons of interest is Ghislaine Maxwell, the daughter of British publishing tycoon Robert Maxwell, and a close companion of Epstein’s before his Florida conviction.

Focus has also turned to his relationship with Leslie Wexner, owner of the company which owns lingerie business Victoria’s Secret. Epstein ran Wexner’s financial affairs for years, and investigators are said to be examining Epstein’s own finances to examine how he secured a vast fortune that allowed him buy islands, a private jet and exclusive properties.

In addition to the criminal investigation, individual victims may pursue civil cases, with lawyers for victims suggesting this week they will sue his estate. A document filed by Epstein’s lawyers last month estimated his assets at about $559 million, including two private islands and four homes.

What about the circumstances of his death?

Epstein’s death by apparent suicide has raised questions about why he had not been under suicide watch – and a plethora of conspiracy theories. Trump retweeted an unfounded suggestion by a conservative commentator which suggested a link between the Clintons and Epstein’s death.

Three separate investigations have been opened into his death – the FBI, the US justice department and the New York City medical examiner’s office have all initiated probes.

Barr said there was evidence of “serious irregularities” at the jail where Epstein was being held – a southern Manhattan prison that has a long history of holding high-profile prisoners.

In particular, investigators are said to be examining whether Epstein was being monitored every 30 minutes by guards, and why he was left alone in his cell, given that he is suspected of having attempted suicide three weeks earlier.