Thousands of activists stage a sit-in at Hong Kong's international airport for a third day on Sunday, August 11th, marking the 10th weekend of protests in the financial hub over a now-suspended extradition law. Video: Reuters 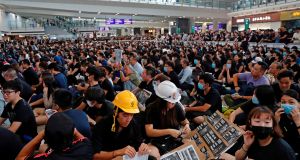 Protesters attend a mass demonstration on Monday after a woman was shot in the eye during a protest at Hong Kong International Airport. Photograph: Tyrone Siu/Reuters. 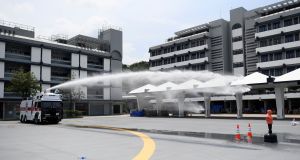 Hong Kong’s airport was shut down on Monday as thousands of demonstrators flooded the terminal to denounce police violence, while Beijing claimed the protests were beginning to show signs of “terrorism”.

Although rallies were held in the airport over the weekend, Monday’s was the first to seriously impact travellers as the world’s eighth busiest airport was clogged with protesters carrying placards and chanting slogans condemning police violence.

The airport authority said on Monday afternoon that “operations have been seriously disrupted as a result of the public assembly in the airport today”, adding they were cancelling flights in and out of the hub for the rest of the day.

Over the weekend police fired volleys of tear gas, bean-bag rounds and pepper balls at crowds and staged baton charges to disperse protesters in several flashpoints around the city.

Officials said 45 people were hurt in the weekend clashes, including a young medic who was apparently shot in the eye with a bean-bag round fired at close range. Doctors said her eyeball was ruptured and they feared she would lose it.

At the airport on Monday, crowds chanted “Corrupt cops return the eye - an eye for an eye”, while many wore eye patches in solidarity with the injured woman.

Demonstrators accuse the police of using increasingly violent tactics to quell the protests, including firing tear gas in subway stations and other enclosed spaces over the weekend.

Several undercover police dressed up as protesters at recent rallies, donning black T-shirts and yellow helmets, and infiltrated the crowd before making a series of surprise arrests.

Police said 149 protesters were arrested on Sunday alone, bringing the total arrested since the protests began two months ago to more than 700.

What began as a protest against a now-shelved piece of legislation that could see Hong Kong suspects extradited to the Chinese mainland, has developed into a wider pro-democracy movement, fueled by anger at what the protesters see as the government’s mishandling of the crisis and the police’s excessive use of force.

In the airport terminal, most of the protesters retreated in the early evening on Monday after word went around that police were preparing to storm the building and make mass arrests.

“We have achieved our goal, we have closed down the airport for the day. Now let’s retreat,” one man on a loudhailer said.

Airport officials said they hoped to reopen the airport by 6am on Tuesday, but hundreds of protesters remained in the arrivals hall late on Monday night.

In Beijing, authorities criticised the ongoing protests and the violent acts of “a very small number of thugs who hurled petrol bombs”, upping the rhetoric by linking the movement to terrorism for the first time.

“Hong Kong’s radical demonstrators have repeatedly used dangerous tools to attack police officers, which already constitutes a serious violent crime, and shows the first signs of terrorism emerging,” said Yang Guang, a spokesman for the Hong Kong and Macao Affairs Office, adding the government would show “no leniency or mercy”.

Earlier on Monday, Hong Kong police unveiled anti-riot water cannon trucks, saying they had completed trials and the vehicles were ready to be deployed.

Amnesty International said police have behaved “in an excessive and unlawful way” over the course of the protests, and warned that the use of water cannons in the city’s densely-populated streets could cause serious injuries and further enflame tensions.

“This trigger-happy approach raises questions as to whether police officers can use water cannons in a way that doesn’t put people at risk of serious injury.”

As the protests show no sign of abating, Hong Kong’s flag carrier Cathay Pacific threatened on Monday to fire any staff who join “illegal protests”, following a weekend demand from Beijing that no airline staff who supported the protests can be on planes in Chinese mainland airspace.