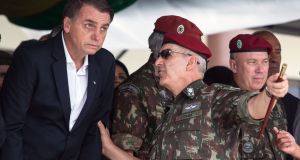 For men steeped in grand strategy, the generals who agreed to serve in the administration of Brazil’s far-right president Jair Bolsonaro increasingly look like they have made a strategic mistake.

Early expectations that this group of retired senior officers would exert some influence and even a measure of control over the mercurial and patently unprepared former army captain are receding rapidly.

Rather than exercising a moderating tutelage, the generals have instead been serially humiliated by the president and his sons, who have been egged on in doing so by the former astrologer Olavo de Carvalho, who serves as their ideological guru.

Victims include a high-profile trio at the heart of the administration – vice-president Hamilton Mourão, former army chief Eduardo Villas Bôas and the one-time head of the UN peacekeeping mission in Haiti, Augusto Heleno. All have suffered online abuse and attacks ranging from accusations of stupidity to insinuations of treason by Carvalho and the Bolsonaro sons, which the president has pointedly refused to repudiate.

When former three-star general Carlos Alberto dos Santos Cruz, a hero of the UN peace enforcement mission in the Democratic Republic of Congo, was summarily dismissed from his ministerial post not long after being called a “starched shit” by Carvalho, he did not hold back. In an interview he described the Bolsonaros’ way of doing business as having resulted in “a shit show”.

For a man who professes to worship the armed forces, Bolsonaro clearly seems to distrust some of the military men in his administration, siding instead with its paranoid, fake-news obsessed alt-right faction inspired by Carvalho and led by his sons.

In doing so, he has confirmed an observation Gen Villas Bôas made last year when he said Bolsonaro did not represent the return of the military to power: “The image of him as a military man comes from outside [of the military]. He is much more of a politician.”

Despite the abuse, there are motives for the military wing of the administration, made up of retired and serving officers but which is by no means a monolithic bloc, to remain in situ. Those officers are behind Brazil’s refusal to sign up for a mooted US military adventure in Venezuela and more generally are a counterweight to the Bolsonaro clan’s oddly servile attitude towards the Trump administration.

But doing so carries risks. The military worked hard since its dictatorship ended in 1985 to convince society it was done with politics and focused only on its constitutionally designated role. The current high command was always more reticent about embracing Bolsonaro than some of its former members. That three-decade-long effort could now be undermined by the presence of so many military figures in such a hard-right administration.

Worse, the armed forces, which take great pride in their professionalism, are being associated in the minds of many Brazilians with a to-date chaotic, crisis-prone presidency. It was Villas Bôas himself who warned last year, even as generals lined up to serve in it, that the military could end up paying the bill for a failed Bolsonaro presidency.

If it does, it will only have itself to blame. After all, it knew long before the rest of Brazilian society what Bolsonaro was like. As far back as a 1993 interview, Ernesto Geisel, the fourth of five military presidents in the 24-year-long dictatorship, dismissed the then congressman as, among other things, “a bad soldier”.

He was referring to Bolsonaro’s record of indiscipline and insubordination, which culminated in accusations of a plot to bomb, among other targets, Rio’s main water mains as part of a campaign to demand better pay and conditions.

Bolsonaro always denied the charges and Brazil’s supreme military court absolved him in a trial in 1988, a majority of judges ruling that doubts over the evidence were enough to quash a lower court conviction. But in a new book, journalist Luiz Maklouf Carvalho has meticulously detailed how the court conjured up the doubts over the evidence so as to absolve Bolsonaro in order to protect the reputation of the armed forces.

That absolution saved him from prison and shortly afterwards he launched his political career which now, 30 years later, is causing all sorts of new headaches for Brazil’s top brass.