Student among protesters facing up to eight years in Russian jail 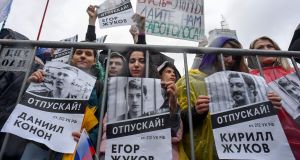 Prominent Russian artists and journalists were among a crowd that gathered outside a Moscow court on Thursday to support a student accused of stirring mass unrest at opposition protests that have rocked the capital in recent weeks.

Yegor Zhukov, a political science student at Moscow’s Higher School of Economics, is one of 14 people arrested for participating in “mass riots” at the demonstrations that were sparked by the exclusion of opposition candidates from an upcoming city parliament election. If proved guilty, the defendants could face up to eight years in prison.

Rights groups and opposition leaders have accused law enforcers of fabricating the criminal charges to punish the opposition and discourage people from taking to the streets.

A popular video blogger, Mr Zhukov has seen an outpouring of public support since police raided his Moscow home before dawn on August 2nd and took him into custody.

Perhaps because of his notoriety, the 21-year old student was not allowed to attend the court hearing at the Moscow City Court in person on Thursday where the judge rejected an appeal for his release from pre-trial detention.

‘Russia will be free’

Speaking on a video beamed into the court from a prison cell, Mr Zhukov denied participating in mass rioting at an unauthorised protest on July 27th and warned the case would discredit the authorities and swell the ranks of the opposition. “I have not committed violence because I consider violence to be ineffective,” he said. “I don’t know if I will be freed. But Russia will be free.”

Daniil Berman Zhukov’s defence lawyer, told the court that investigators had lied while hastily pulling together the case and said there was no evidence to justify holding his client in custody. “Case investigators should at least pretend to be upholding the law. It’s outrageous they asked the court to uphold the motion,” he said.

At least 100 of Mr Zhukov’s supporters began queuing outside the court early on Thursday morning, but few managed to get into the tiny room where the hearing took place. Several celebrities joined the crowd including Russian theatre and film star Chulpan Khamatova and Pyotr Verzilov, a dissident activist and artist famous for representing the Pussy Riot punk band.

Court bailiffs refused to admit Oxxxymiron, a top Russian rapper who had pledged to put up two million roubles (€27,000) in bail to secure Mr Zhukov’s release, into the hearing leaving him to listen to the proceedings from a crowded corridor. Three other defendants facing mass rioting charges were also ordered to remain in pre-trial detention including Daniil Konon, Alexei Minyailo and Kirill Zhukov (no relation of Yegor Zhukov) during Thursday’s court hearing.

“It’s understood that the decision on the arrests has not been taken by the court but by the Kremlin,” said Lyubov Sobol, an opposition activist who has been leading the protests. “The cases are politically motivated.”

Russia’s Presidential Human Rights Council called for a review of the mass rioting cases this week, saying charges that demonstrators had acted violently appeared unfounded. In a letter to Yuri Chaiko, the Russian prosecutor, the council said it had seen no evidence of pogroms, fires or the destruction of property at the unauthorised rally on July 27th. Participants in the demonstration had not used “weapons, firearms or poisonous substances”, it said.