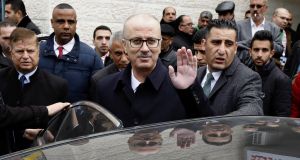 President Mahmoud Abbas has accepted the resignation of the Palestinian cabinet and begun consultations to form a new government consisting of Palestine Liberation Organisation factions, dominated by his Fatah organisation, to prepare for a parliamentary election this year.

Outgoing prime minister Rami Hamdallah will remain as caretaker in the meantime.

Mr Abbas would like to strengthen his hand by finalising a cabinet before Fatah, Hamas and Islamic Jihad meet for reconciliation talks in Moscow scheduled for February 13th.

However, the Popular Front and Democratic Front said they will not join a cabinet that excludes Hamas and Islamic Jihad. Without these influential fronts – which support national unity – the proposed government will lack credibility with many Palestinians.

“Fatah is one of the factions of the PLO [Palestinian Liberation Organisation], and as such it is not entitled to make a decision alone,” said Popular Front official Miriam Abu Dakka.

“The Front will not participate in a government that solidifies division. Our goal is to end the division [between Fatah and Hamas] and thwart the deal of the century,” she said, referring to the Trump administration’s so far secret plan for resolving the Palestinian-Israeli conflict.

Observers suggested Mr Abbas (83) seeks to ensure that Fatah maintains its grip on the West Bank while senior Fatah figures compete over who should succeed him, although he does not intend to stand down.

A former university president, Hamdallah recruited a technocratic cabinet approved by Fatah and rival Hamas in 2014 but a power-sharing failed, deepening the divide between the West Bank administration and Hamas-ruled Gaza.

Hamas seized control of Gaza from Fatah in 2007 but a decade of Saudi, Egyptian and Russian mediated talks has failed to end the destructive split. To put pressure on Hamas to hand over Gaza, the Palestinian Authority has cut fuel and funds to Gaza, punishing its two million residents without forcing Hamas to capitulate.

Mr Abbas’s bid to form a cabinet coincides with the announcement by Unrwa, which cares for five million Palestinian refugees, that it seeks to raise $1.2 billion for operations in 2019. Last year the Trump administration cancelled the $364 million US contribution to Unrwa, threatening instability in the Israeli-occupied Palestinian territories and the countries hosting refugees.

Although the EU, its members, and other donors made up for the loss of US aid, Unrwa faces an even stiffer challenge this year.