Carles Puigdemont: ‘I may participate in the European elections’

Interview: Exiled Catalan leader speaks on the impending trial of separatists and Brexit 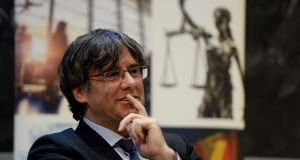 Carles Puigdemont, the exiled Catalan separatist leader, has signalled that he could run in European elections in order to pursue the case for independence in Brussels.

In an interview with The Irish Times, Puigdemont said he would be interested in running in the May elections if Catalan separatists decided to run a single set of candidates, rather than each party running their own candidates.

“If there is a single list, I will support that, I will offer that, and, if necessary, I will participate on that,” he said.

“I think it’s interesting for the Catalan process to have a voice in the European Parliament, and to put on the European agenda the right of self-determination,” he said. “It is important to participate directly in the European elections in order to say, ‘that is a European issue; that concerns the fundamental values of Europe; that needs a political solution and that concerns all the European countries.’”

Puigdemont recently launched a new group, Crida Nacional (National Call), to rally support for Catalan independence and work for unity within the movement, which observers say has become divided along party lines, most obviously between Puigdemont’s Catalan Democratic Party (PDeCat) and the Catalan Republican Left (ERC).

He rejected suggestions, however, that the independence movement was divided, or that the establishment of his new grouping was an attempt to bridge the gap between the different political parties.

“The Latin Divide et Impera [divide and conquer] means something in history. The Spanish state has some hope of Catalan division in order to be more strong against us,” he said.

“Crida is an attempt to create heterodox space, and non-ideological space, to create more comfortable conditions for the parties in order to share the same objective. It’s in order to facilitate to join, if not parties, then voters.”

Puigdemont strongly criticised the impending trial in Spain’s supreme court of 12 leaders involved in the Catalan declaration of independence in October 2017, which led to a period of direct rule from Madrid. Nine of those leaders are in jail. That declaration came just weeks after an independence referendum deemed illegal by Spain’s constitutional court, which was marred by baton-wielding Spanish police hitting out at voters.

“We expect absolution,” said Puigdemont of the jailed leaders. “The only proof of a fair trial is absolution, because there is no case. There is no rebellion, no embezzlement of funds, no use of violence to organise a referendum. That is clear. It is a political construction,” he said.

He said that the trial was “not acceptable”.

He said that Spain “is not a full democracy. There [are] political prisoners, and there is no real freedom of speech and expression.”

Asked about the prospect of civil unrest in the event of a conviction, he said that he aims to “maintain the Catalan movement in a non-violent way”.

“There is a risk, of course, to create serious disappointment in Catalan society if our leaders will be condemned to several years in jail.”

He said relations had improved under the new Socialist government of Pedro Sánchez in Madrid, which took over from the centre-right administration of Mariano Rajoy, but he was disappointed by a lack of detail in Sánchez’s pronouncements on Catalan independence.

“When I asked Pedro Sánchez what exactly was his political project for Catalonia, he is saying nothing concrete, and that is still the position. Nothing concrete, despite some announcements,” he said.

Puigdemont also sought to draw a distinction between the Catalan independence movement and some of the nationalist movements which have emerged in European politics in recent years.

He said Catalan nationalism was inherently pro-European, and “always linked to modernity”.

“Our national movement is not based on ethnic elements. It is impossible to describe ethnically who is or is not Catalan. We are proud of that, we are the result of constant waves of migration,” he said.

“To be Catalan is nothing to do with the blood, or the soil, but to volunteer to be Catalan. It’s a modern identity.”

Puigdemont said that Brexit could present an opportunity for Irish unification and also a second referendum on Scottish independence. Asked about Irish unity and Brexit, he said “probably it is [an opportunity], and also for a new Scottish referendum”.

As a European, I prefer to see a more large and politically unified European Union, so Brexit is not good news for us

However, he added that he did not want to comment on domestic questions, despite a policy of supporting political movements campaigning for self-determination.

“We support all the peoples who are demanding to exercise the right of self-determination in a non-violent way,” he said. “But every case is different. And every case must choose its own path.”

He said that the departure of the UK from the European Union was a “serious loss”.

“As a European, I prefer to see a more large and politically unified European Union, so Brexit is not good news for us. Secondly, I’m afraid it could provoke serious economic effects against both Europe and the UK.”

He added that he respected the June 2016 vote, but was concerned by what he saw happening in British politics. “We must not forget it was a sovereign decision of the British people, and they have the right to decide their own future, and we must respect that,” he said.

“[Also] I’m seeing political society with no clear objective . . . there is consensus to respect the decision of the people, but nothing else.

“As observers, we are very shocked with how things are going.”