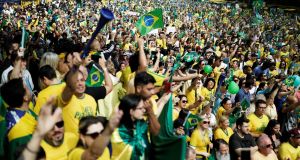 Supporters of Jair Bolsonaro, the far-right presidential candidate, shout slogans during a demonstration in Sao Paulo, Brazil, over the weekend. Photograph: Nacho Doce/Reuters

The campaign of Brazil’s far-right presidential candidate Jair Bolsonaro has been accused of fascism and coup-mongering after a video emerged of his son saying it would take only “one soldier and a corporal” to close the country’s supreme court.

The recording of Eduardo Bolsonaro, speaking to a group of students studying for the entrance exam for Brazil’s federal police, was made in July but only surfaced over the weekend. He made the comments in response to a question about what would happen if the supreme court barred his father’s candidacy.

At the time the court was considering a charge of racism against his father, a former army captain, who heads into Sunday’s presidential runoff against Workers’ Party candidate Fernando Haddad as firm favourite. The court voted not to take up the racism case presented by the chief federal prosecutor.

Eduardo Bolsonaro won the most votes of any candidate for the lower house of congress in elections earlier this month. His father has proposed raising the number of judges on the supreme court from 11 to 21, leading to accusations that he wishes to pack it with his own appointees in an effort to undermine the independence of the judiciary.

The comments made in the video drew widespread condemnation from politicians and jurists. Former president Fernando Henrique Cardoso said they “reeked of fascism”, while the supreme court’s longest-serving member, Celso de Mello, labelled it “coup-mongering”, warning Mr Bolsonaro that big vote tallies “do not legitimise moves against the political-juridical order based in the text of the constitution”. Responding to the video, his colleague on the court, Marco Aurélio Mello, said the country was living through “dark times”.

‘Head of a militia’

Speaking at a campaign rally, Mr Haddad accused Mr Bolsonaro of being the “head of a militia and his sons are his thugs. You cannot control this type of violence. The fear of anyone with common sense only grows; only those who are anaesthetised have no fear.”

Mr Bolsonaro’s son apologised for the video, saying he had just repeated “a joke I heard off someone in the street”. His father said he had no intention of closing the court and that anyone who said that he did “needs to consult a psychiatrist”.

The incident is the latest example of Mr Bolsonaro having to distance himself from controversial declarations made by his inner circle. In recent weeks he has also had to dismiss a proposal by his running-mate, a former four-star general, to appoint a “council of notables” to rewrite the constitution and slapped down the economist designated to be his finance minister for a series of unpopular statements.