Khashoggi asked Saudis not to suffocate him, audio of murder shows 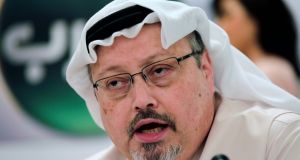 Jamal Khashoggi: He was told to send a text message to his son saying he was in Istanbul: “Don’t worry if you cannot reach me.” Photograph: Hasan Jamali/AP

Texts of audio recordings of the murder of Saudi dissident journalist Jamal Khashoggi in his country’s Istanbul consultate have been published for the first time by the Turkish daily Sabah. The recordings, made by Turkish intelligence, reveal in detail how the 2018 conspiracy to kill Khashoggi unfolded.

Preparations were made as soon as he entered the consulate on September 28th to obtain documents for his marriage to his Turkish fiancee Hatice Cengiz. Sabah reports consular intelligence chief Ahmed Abdullah al-Muzaini sent a message in code to Riyadh informing officials of Khashoggi’s visit and his return on October 2nd to receive the material.

This was followed by a phone call from Saudi consul Mohammed al-Otaibi to the office of Saud al-Qahtani, a close aide of Crown Prince Mohammed bin Salman. Mr Qahtani’s agent was to lead a “top secret mission” to kill Khashoggi instead of spiriting him back to Saudi Arabia, as Riyadh claimed when the murder became a global scandal.

On October 1st the consul was notified of the arrival of a mysterious 15-member “commission” and decided where its work would be carried out. Ahead of Khashoggi’s arrival at the consulate on October 2nd, commission second-in-command Maher Abdulaziz Mutreb asked Saudi forensic pathologist Salah Mohammed Tubaigy if it was “possible to put the body in a bag?” He replied, “No, too heavy, very tall too.”

He admitted he had “never worked on a warm body” but promised to “manage that easily”. He told other team members to “wrap the parts in plastic bags, put them in suitcases and take them out” of the consulate.

Tubaigy expressed concern that his superior did not know what he was doing. He said, “There is no one to protect me” from being held accountable for dismembering Khashoggi’s corpse. Mutreb asked if the “animal to be sacrificed [had] arrived”.

Khashoggi entered the consulate at 13.14. When he was invited to go to Otaibi’s office, he grew suspicious. The official who met him took him by the arm, prompting him to say, “Let me go. What do you think you’re doing?”

As Khashoggi entered the room, Mutreb tried to calm him by giving him the false impression he was to be kidnapped, “We have to take you back” to Riyadh under an order from Interpol, he said. Khashoggi replied: “There are no lawsuits against me. My fiancee is waiting outside.”

He was told to send a text message to his son saying he was in Istanbul: “Don’t worry if you cannot reach me.”

He refused and was threatened by Mutreb, who ordered him to be drugged. As Khashoggi lost consciousness, they put a plastic bag over his head, causing him to cry, “ . . . you will suffocate me”. His last words were followed by sounds of a brief struggle and the whine of Tubaigy’s saw dismembering the body.

Despite Saudi opposition, multiple investigations have been conducted and Interpol has issued arrest warrants for 20 suspects. Tubaigy and Mutreb are among five facing the death penalty in Saudi Arabia. Qahtani has disappeared.

It is not clear why Ankara allowed this material to be released at this time.