No-deal Brexit battle set to come to head in September 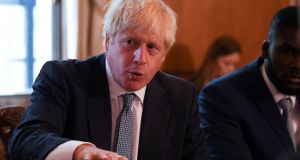 British prime minister Boris Johnson: One MP said a vote of confidence in his government would have more chance of success later in October, as the reality of no-deal drew nearer. Photograph: Daniel Leal-Olivas/Pool via Reuters

Boris Johnson is preparing for a parliamentary battle against MPs trying to block a no-deal Brexit in the second week of September, as his cross-party opponents continue to be divided about the best way to stop the UK crashing out on October 31st.

A senior British government source said Downing Street believes the first legislative showdown over no deal will be on September 9th, when parliament is due to debate a progress report on power-sharing in Northern Ireland.

The expectation is that a cross-party group of MPs will try to use this to carve out time to legislate against a no-deal Brexit by requesting an extension to article 50.

The prime minister could face a confidence motion brought by Jeremy Corbyn aimed at collapsing his government as early as September 3rd, when MPs return from their summer break.

Diane Abbott, the shadow home secretary, said on Monday that an early confidence motion in the prime minister “has to be an option”. However, senior Labour and rebel Conservative sources are sceptical about whether they have the numbers to defeat Mr Johnson at this stage, as many Tory MPs still believe there are legislative routes to prevent a no-deal Brexit that have to be exhausted first.

One source close to a former cabinet minister, who is co-ordinating efforts to stop no-deal, said they believe at least five or six Conservative MPs would be needed to vote against Mr Johnson’s government, but “the numbers aren’t there yet”. This is because several independent MPs and possibly some Labour MPs opposed to a second referendum could abstain or vote with the government.

One independent MP said speculation about a no-confidence vote immediately after recess was “jumping ahead of events”. “You need Tory rebels to win, and they have to have a reason to support it,” the MP said. “It can’t just be tokenistic, and it can’t just be because Boris isn’t the leader you wanted. There has to be a coherent reason and a coherent subsequent plan to stop no-deal.”

As uncertainty clouds the confidence vote, there are several different cross-party groups trying to devise legislative ways to stop a no-deal Brexit involving senior Tory MPs such as Dominic Grieve and Philip Hammond.

However, they have not yet agreed on a single strategy, and the Institute for Government warned on Sunday that MPs opposed to no-deal may “find few opportunities to make their move – and time is running out”.

A senior government source said Downing Street expects the first showdown to happen on September 9th because the government is bound by law to provide a report on Northern Ireland on September 4th and to then debate it in parliament within five days.

Boris Johnson may meet key EU leaders, such as Angela Merkel and Emmanuel Macron, but not Taoiseach Leo Varadkar, before the G7 summit in Biarritz, France, at the end of August.

The EU is adamant that the backstop is not up for renegotiation, but the senior government source said there was still hope in Downing Street that a deal might be possible if it became clear that parliament could not prevent no-deal on October 31st.

The government source said No 10 was not expecting any breakthrough with the EU until Brussels had seen what happens in the first weeks of September, as the parliamentary battle plays out.

One Tory MP fighting against no-deal said this was part of No 10’s effort to unfairly blame their side for frustrating a deal with Brussels, and Downing Street had been quite successful in “picking off” colleagues who were worried about being held responsible. However, the MP said a vote of confidence in Mr Johnson’s government would have more chance of success later in October, as the reality of no-deal drew nearer and its consequences became more apparent.

They said this was a “very nuclear option” that would only be tried as a last resort, given the risk that this approach could backfire and lead to an election after a no-deal Brexit.

If a no-confidence vote was passed, MPs would first have 14 days to form an alternative government, but if this was unsuccessful, an election would be triggered. In this event, Dominic Cummings, Mr Johnson’s senior adviser, has threatened to press ahead with Brexit on October 31st with or without a deal and schedule the election for the days after that date, while parliament is shut down.

The prime minister’s official spokesman said Mr Johnson remained “very clear in his determination to get a deal”. He said: “He believes a deal is in the UK’s and the EU’s best interests and he has said he will be energetic in pursuit of a deal. We very much want a deal, but we’re also clear about what needs to be achieved in order to secure that.”

The spokesman added: “He has held a number of conversations with EU leaders, so has the prime minister’s sherpa, David Frost. We are also making very detailed preparations at home to ensure the UK is ready to leave the EU in all circumstances on 31 October.

Stephen Barclay, the Brexit secretary, said he had stressed the government’s message that the UK is leaving on October 31st with or without a deal in a conversation with EU commissioner Phil Hogan, saying that “while we’re ready to energetically enter into new negotiations in a spirit of friendship, the backstop must go”. – Guardian