Jordan economy groans under the weight of refugee crisis 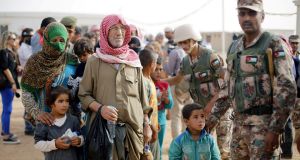 Syrian refugees after crossing into Jordan territory with their families in 2015. Photograph: Muhammad Hamed/File Photo/Reuters

Debt is 95 per cent of GDP. Unemployment was 18.7 per cent during the last quarter; youth unemployment has reached 35 per cent. “We used to have five-year plans. Now we have medium-term, two-year plans due to so many crises [in the region],” says Kawar.

After the 2011 Arab Spring, Egypt stopped the supply of cheap natural gas, making energy costs for manufacturing and households extremely high, she says. “We are the second most water-poor country in the world so can you imagine [the crisis] if you add 1.3 million people.”

Jordan needs to increase exports and investment but cannot compete with goods manufactured in Gulf countries or export to Europe.

“Jordan is a hospitable country,” Dr Kawar says. Jordanians are an amalgam of indigenous Bedouin, 19th-century refugees from the Caucasus, Syrians, 1948 and 1967 Palestinian refugees and Iraqis fleeing war in their country. The influx of Syrians since 2011 has put a great strain on the country.

“Eight years into the Syrian crisis we see no solution. Syria needs a political solution. We remain committed to hosting Syrian refugees. They can leave voluntarily for their own country or a third country,” she says, adding that Jordan will not force them to return home.

“Jordan has reached its maximum capacity, given its resources. Social infrastructure, housing, government services are overstretched, negatively impacting our ability to provide services for Syrian refugees. Our hard-earned development gains are threatened,” she says.

The kingdom has responded positively to the Syrian refugee challenge compared with Lebanon, which has neither provided shelter for the refugees nor given them access to public schools and healthcare. “We did a big favour to Europe by providing access to the refugees who have less incentive [than those in Lebanon] to go to Europe,” says Dr Kawar.

Jordan has adopted a “national system approach” to cater for the refugees. International donors urge Jordan to integrate them in development plans and supply services and jobs. They are employed in agriculture, construction and manufacturing textiles for export. Jordan insists that communities hosting refugees receive development aid.

The presence of some 1.2 million Syrian refugees means Jordan would be unable to provide for its citizens as well as two million Palestinian refugees who depend on the UNRWA for support, if the UN agency has to cut educational or health services due to US defunding.

Dr Kawar says prime minister Omar Razzaz emphasises “self-reliance rather than dependence on international assistance”, but that that will take time. Jordan has adopted a three-part policy: it will continue to provide support for Syrian refugees, make structural changes in the economy, and seek to improve the lives of the public by tackling the lack of equality and upgrading educational, health, and other services.

Corruption will be reduced by unifying and computerising the administration and extending the law for the declaration of assets covering ministers and legislators to every one with government connections. This could encourage Jordanians to “regain trust in the government”.