Brazil’s overhauled congress to be dominated by hard right

Political polarisation deepens with newcomers comprising more than half chamber 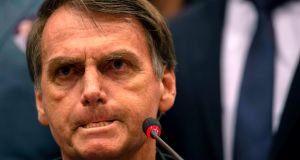 But when the new legislature convenes on February 1st, it will be a very different body to the deeply discredited one it replaces, with major implications for whoever wins the country’s presidential run-off on October 28th.

Despite incumbents having tweaked Brazil’s election rules in order to boost their chances of securing new mandates, fed-up voters still moved through their ranks like a scythe. They upended predictions that those in power had done enough to insulate themselves from popular rage at corruption and economic mismanagement by pushing the turnover rate of deputies in the lower house to a 24-year high.

Of the 513 seats in the chamber, 267 will be occupied by newcomers. The renewal rate in the 54 senate races held was even higher with 46 new faces coming into the upper chamber.

Among the newcomers breathing fresh air into a body that suffers from historic levels of disapproval among voters will be young first-time deputies like Tábata Amaral, a 24-year-old Harvard graduate from São Paulo’s slums, elected for a left-wing party on a platform of improving Brazil’s dismal education standards.

“My greatest care during the campaign was to say yes I am looking for new people, practices and ideas in the congress. But not just this, but a renovation based on proposals and new ways of doing politics,” is how the new deputy explains her headline-grabbing 264,450 votes.

But while the incoming congress will contain more women and Afro-Brazilians than the outgoing one, the unusually high levels of turnover are largely explained by a national lurch to the hard right that according to opinion polls is set to lift Jair Bolsonaro to the presidency.

Having managed to elect just a single deputy four years ago, the polemical former army captain’s Social Liberal Party returned 52 this time around, increasing its share of the vote by 1,341 per cent to become the second-biggest party in the deeply fragmented chamber.

Other big winners were the congress’s evangelical caucus, especially its ultra-conservative neo-Pentecostal wing, as well as the so-called “bullet caucus” – former members of the military and police who typically operate as a hardline bloc demanding tougher action to combat Brazil’s never-ending public security crisis.

This hard-right influx reflects the deepening political polarisation in Brazil between left and right, much of it driven by a flood of hate and misinformation on Facebook and WhatsApp.

But this new right also benefited from being largely exempt, due to its previous political irrelevance, from the epic corruption scandals that in recent years have shaken Brazilian politics to the core.

“I think the result was less the fruit of a clear conservative vision and more an effort at renewal by voters,” says Antônio Augusto de Queiroz, of the Inter-union Parliamentary Advisory Department, a labour organisation that monitors congress. “Just this renewal focused on conservatives because they best positioned themselves against the status quo even if they offer nothing coherent to replace it with.”

Rather than the left, the hard right’s rise has been at the expense of the largest of Brazil’s traditional centre and centre-right parties like the Democratic Movement of Brazil and the Social Democrats which were humiliated in both the presidential and congressional contests. Much of their experienced officer class, facing multiple accusations of wrongdoing, were dismissed by voters.

On the left of the aisle there was a similar though less pronounced pattern. The Workers Party, its leader Luiz Inácio Lula da Silva in jail for corruption and many of his lieutenants also behind bars or facing trial on charges related to the party’s 13 years in power, saw its share of the vote for the lower house drop by 25 per cent and the bid by former president Dilma Rousseff for a senate seat end in disaster.

But the smaller, hard-left Socialism and Liberty party increased its vote by 59 per cent, almost doubling its delegation from six to 10 seats. One of the things distinguishing it from its larger ideological cousin is the fact it has not been swept up in the probes.

“You cannot say this was just a conservative wave. This happened but the result for Socialism and Liberty indicates that the feeling among the population was one of rejection of corruption which then ended up being linked to this conservative wave,” says Luciano Santos of the Movement to Combat Electoral Corruption.

If the hard right’s message finally gained traction after decades of confinement on the political fringes in part thanks to the exposition of the corruption of their competitors on the right of the spectrum, the question now is whether it will be able to govern.

Should Workers Party’s candidate Fernando Haddad score an upset and beat Bolsonaro to the presidency then the answer is no, though it will be well-placed to use its new musculature in congress to make life for a Workers Party administration deeply uncomfortable.

But the greater challenge will likely come if Bolsonaro wins.

Brazilian politics is historically brutal on those who find themselves out of their depths when it comes to running a sprawling, complex and opaque state apparatus, and Bolsonaro and his cohorts in congress have little experience in running anything.

“The renovation in the congress is significant but is no guarantee that it will bring an improvement in quality,” says congressional monitor Augusto de Queiroz. “It is an influx with little notion of how the institutions of state work. The risk is that after raising expectations among the population, this inexperience and lack of knowledge will end up leading to renewed frustration.”