Algerian spring lives on as Sudan descends into violence

Grassroots protest has avoided being taken over by Islamist groups 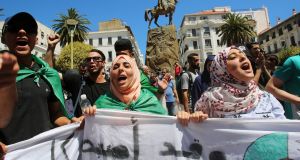 While Sudan’s civilian uprising is crushed in a bloody crackdown, Algeria’s peaceful protest movement continues unabated and might even yield results despite the apparent intransigence of the regime’s military leaders, analysts say.

In April, after two months of mass protests, the army’s generals relented to Algerian protesters’ demand to oust 82-year-old, wheelchair-bound leader Abdelaziz Bouteflika who was seeking re-election for another five-year term.

Since then, the leaderless grassroots movement – “Hirak” as Algerians call it – has persisted, avoided being hijacked by Islamist groups, and stuck to its demand for a civilian-led transition to democracy. In doing so, it is challenging the military, which has considered itself the ultimate guardian of the gas-rich Northern African state since winning the war of independence against France in 1962.

Algerian generals are reluctant to use violence against the protesters “because they are not sure their troops will be loyal to them”, said Lahouari Addi, a prominent sociologist of Algeria at the Institute of Political Studies in Lyon. “It is unique; you have millions of civilians who are putting the high-ranking officers under siege peacefully and politically.”

So far, both the army and the demonstrators have been careful to avoid a descent into violence. Street protests, which draw hundreds of thousands of people from all walks of life every Friday, have avoided calls for a general strike or the permanent occupation of public squares, which would be perceived as escalations. Meanwhile, the military has not used force to disperse demonstrations.

Neither side wants a repeat of the “black decade” of the 1990s in which more than 100,000 people died in a civil war triggered by the army when it interrupted presidential elections to prevent the victory of Islamists, analysts say. Unlike Sudan, there are no rogue factions within the military or militias that could cause mayhem, they add.

Army chief Ahmed Gaid Salah is the one who pushed Bouteflika out, but he is now resisting calls for a political transition headed by independent and trusted civilian figures. The 79-year-old general now appears to be running out of options after regime plans for a quick presidential election on July 4th have foundered amid a dearth of candidates and widespread popular rejection.

This may provide an opening for meaningful political concessions, said Amel Boubekeur, research fellow at the School for Advanced Studies in Social Sciences in Paris.

The “army will be obliged to step back”, she said. One possible outcome is for Gen Salah to be pushed to resign to allow a new generation of officers to emerge “to give a more acceptable image of the army and ease negotiations with civil society,” she said. However, “it is unlikely the officers will accept a lessening of their privileges”, she added.

A crackdown is possible. “Now there are only two possible routes. It will be either a direct takeover of power by the army, or the opening of a dialogue with the political class to organise a transition,” said Soufiane Djilali, head of the Jil Jadid opposition party. He cautions that protesters have to resist calls from those impatient for speedy results because it could “push the chief of staff into extreme decisions that would be damaging”.

The regional context also remains a threat to a democratic transition. The influence of western democracies has been waning across the Arab world amid European fears of migration and terrorism. Regional powers, namely the UAE and Saudi Arabia, are wary of experiments in democracy in their neighbourhood. They have preferred to bolster military strongmen such as Abdel Fattah al-Sisi, the Egyptian president, and Khalifa Haftar, the Libyan general who has sabotaged a UN plan for a reconciliation and has brought Libya to the brink of civil war.

“Based on how they have been behaving on other theatres, they would want civilian politicians to be very weak,” said Jalel Harchaoui, research fellow at the Clingendael Institute in The Hague. “They look at this moment of leaderless popular mobilisation and see an opportunity to support an outcome that is more authoritarian.” – Copyright The Financial Times Limited 2019