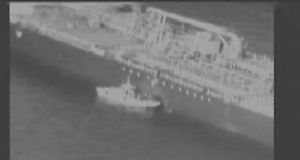 Still image taken from a US military handout video purports to show Iran’s Revolutionary Guard removing an unexploded limpet mine from the side of the Kokuka Courageous Tanker, June 13th, 2019. Photograph: US Military/Reuters

Iran said on Friday it was alarming and wrong of the United States to blame Tehran for attacks on two oil tankers at the entrance to the Gulf, after an incident that has raised concerns about a new confrontation in the vital oil shipping route.

Washington released a video that it said showed Iran’s Revolutionary Guards were behind Thursday’s attacks on the Norwegian-owned Front Altair and the Japanese-owned Kokuka Courageous near the Strait of Hormuz shipping chokepoint.

A Dutch firm said it had been appointed to salvage the ships in the Gulf of Oman on Friday, after the attacks that caused a spike in oil prices.

About a fifth of the oil consumed globally passes through the Strait of Hormuz, shipped from Gulf energy producers, including Saudi Arabia, the world’s biggest crude exporter.

The US military said black-and-white footage filmed from a US aircraft showed Iranian forces on a their patrol boat drawing up to Kokuka Courageous, after blasts struck both vessels, and removing an unexploded limpet mine from its hull.

“It is the assessment of the United States government that the Islamic Republic of Iran is responsible for the attacks that occurred in the Gulf of Oman,” US secretary of state Mike Pompeo told reporters.

He said the assessment was based on intelligence, the weapons used, expertise required and similar recent attacks.

Washington has also blamed Iran or its proxies for attacks on May 12th that crippled four oil tankers in the same area. In addition, it said Tehran was behind May 14th drone strikes on two Saudi oil-pumping stations. Tehran has denied all the charges.

“These accusations are alarming,” Iranian foreign ministry spokesman Abbas Mousavi said, adding that blaming Iran for Thursday’s attacks was “convenient” for US officials.

Tehran has said the United States and its regional allies, such as Saudi Arabia and the United Arab Emirates, were “warmongering” by making accusations against Iran.

The cause of Thursday’s blasts remains unclear. An initial report that Kokuka Courageous, which was being towed to a UAE port on Friday, had been struck by torpedo was dismissed by a source familiar the issue. The owner of the tanker, which carried methanol, later said it was hit by two “flying objects”.

A source has said a magnetic mine could have caused the explosion on Front Altair, which had a cargo of naphtha. Its owner said on Friday the fire erupted was put out. The blaze that sent smoke towering into the air charred the ship’s hull.

Iranian TV showed 23 crew in Iran believed to be from Front Altair on Friday, and said it experts would assess whether they could return to the ship. The crew from Kokuka Courageous were picked up and handed to a US navy ship on Thursday.

US and European security officials, as well as regional analysts, have cautioned against jumping to conclusions, leaving open the possibility that Iranian proxies, or someone else entirely, might have been responsible for Thursday’s attacks.

Britain said it took the matter “extremely seriously” and, if Iran was involved, “it is a deeply unwise escalation.”

Iranian-US tensions began ratcheting up after US president Donald Trump pulled out of a deal last year between Iran and global powers that aimed to curb Tehran’s nuclear ambitions in exchange for relief from international sanctions.

Since then Washington has toughened its sanctions regime, seeking to force Iran’s oil customers to slash their imports.

Iran’s crude exports fell to about 400,000 barrels per day (bpd) in May from 2.5 million bpd in April 2018, draining Tehran’s main source of revenues and hurting an economy already weakened by years of isolation.

Iran has repeatedly warned it would block the Strait of Hormuz, a narrow channel between the Iranian and Omani coastlines, if it is barred from selling oil.

The Trump administration said in May it would send troops and other forces to the Middle East, citing Iranian threats, a move Tehran has called “psychological warfare”.

Responding to rising tension, UN secretary-general Antonio Guterres told the UN Security Council on Thursday the world could not afford “a major confrontation in the Gulf region”.

The European Union and China have each called for restraint from all sides.

Iran and the United States have both said they want to avoid war. Iran has said it would not start a conflict but would deliver a “crushing response” to any attack. The US military has said “a war with Iran is not in our strategic interest.”

Mr Pompeo said US policy was to make economic and diplomatic efforts to bring Iran back to negotiations on a broader deal.

But Iran dismissed Mr Trump’s overture, details of which were not made public. “I do not see Trump as worthy of any message exchange, and I do not have any reply for him, now or in future,” Iranian supreme leader Ali Khamenei said.–Reuters