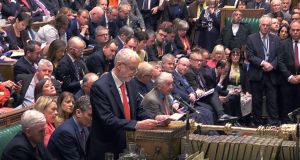 After the vote to extend the article 50 deadline, Labour leader Jeremy Corbyn (centre) said parties should come together to agree a common approach to Brexit. Photograph: PA Wire

MPs have narrowly rejected an amendment that would have given Parliament rather than the government control over how Brexit should proceed.

The amendment tabled by Labour’s Hilary Benn was defeated by 314 votes to 312, with 15 Conservatives defying their party whip to support it and six Labour MPs voting against.

David Lidington, Theresa May’s de facto deputy, promised before the vote that if a Brexit deal is not approved next week, MPs would have a chance on March 25th to vote on the next steps.

This could take the form of indicative votes on options such as membership of the customs union and single market or a second referendum.

The defeat of Mr Benn’s amendment means that the government will retain control of the parliamentary timetable as decisions on Brexit are taken.

After the vote to extend the article 50 deadline, Labour leader Jeremy Corbyn said parties should come together to agree a common approach to Brexit.

“Today I reiterate my conviction that a deal can be agreed based on our alternative plan that can command support across the House. I also reiterate our support for a People’s Vote – not as a political point-scoring exercise but as a realistic option to break the deadlock,” he said.

MPs rejected by 334 votes to 85 an amendment that would have delayed Brexit for long enough to hold a second referendum after Labour whipped its MPs to abstain.

The People’s Vote campaign for a second referendum withheld support for the amendment on the grounds that it did not think it was “the right time to test the will of the House” on the case for another vote.

But Anna Soubry, the former Conservative minister who is now in the Independent Group, accused Labour of letting down its voters.

“This is a betrayal of Labour party members and voters, Labour MPs, Labour’s conference policy and, most importantly, the British public. The Labour party leadership are determined to deliver Brexit, which would harm our country,” she said.

Earlier, the DUP’s Ian Paisley expressed outrage at environment secretary Michael Gove’s statement on Wednesday that in the event of a no-deal Brexit, London would engage with Dublin on introducing “a form of direct rule” to Northern Ireland.

Mr Paisley said Mr Lidington should know how insulting to DUP MPs the suggestion that “more powers would be given to Dublin” to be exercised over Northern Ireland.

“He will also know that it is the members who sit on this bench who keep his party in power,” he said.

Mr Lidington said that the government stood by “every aspect of the three-stranded process” embodied in the Belfast Agreement and the peace-building process in Northern Ireland.

“I can put on the record that there are absolutely no plans at all to transfer additional powers or rights to the Government of Ireland.

“There are certain rights of consultation that flow from the three-stranded process, and those, clearly, we need to observe,” he said.