Israel and Hamas seek richer ceasefire accord via mediators 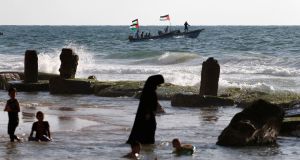 Palestinians in boats in the sea at Gaza during a protest against the Israeli blockade on August 18th. Photograph: Mohammed Salem/Reuters

After agreeing to a truce on the Gaza border, Israel and Hamas hope to clinch a more comprehensive ceasefire arrangement, via Egyptian and United Nations mediators, by the end of the month. The temporary truce, based on the ceasefire that followed the 2014 Gaza war, came after a round of intense cross-border exchanges earlier this month left the sides on the brink of a major military conflagration. In return for Hamas halting rocket attacks and the launching of incendiary kites, Israel agreed to reopen the Kerem Shalom goods crossing into Gaza and to extend the fishing zone off the Gaza coast.

With neither side seeking a new war, the contacts for a more comprehensive arrangement went into high gear, with Egyptian intelligence chief Abbas Kamel meeting Israeli leaders while representatives of the various Palestinian factions, except President Mahmoud Abbas’s Fatah, held separate talks in Cairo. Mr Abbas repeated his demand that Hamas hand full control over the Gaza Strip to the Palestinian Authority government, insisting that funds earmarked for Gaza by channelled via the Ramallah government. Otherwise, he said, Hamas should assume full responsibility.

The Lebanese-affiliated al-Mayadeen network reported that the wider truce agreement between Israel and Hamas would include a one-year ceasefire and the establishment of a sea route between Gaza and Cyprus under Israeli security supervision, with Qatar partially financing public sector salaries and electricity in Gaza. Hamas’s Gaza deputy leader Khalil al-Hayya said that negotiations regarding a long-term ceasefire arrangement with Israel are in their “final stretch,” but will be completed only after the Muslim holiday of Eid al-Adha (Festival of Sacrifice), at the end of the month.

Israel views the emerging deal as a trial period that, if it succeeds, will pave the way for a longer-term arrangement that will include talks about an airport in Egyptian Sinai for the use of the Palestinians in Gaza, broad rehabilitation of infrastructure with foreign funding and a prisoner exchange. An Egyptian source said that if the truce proves viable, negotiations will be held to extend it to four years. He further confirmed that a broader agreement would include a prisoner exchange, under which Hamas will return two Israeli civilians who crossed into the Gaza Strip as well as the remains of two soldiers who were killed during the 2014 Gaza War.

Hamas denied that a prisoner exchange deal was in the works, saying it opposes linking a truce deal to a prisoner exchange. The most significant opposition to the emerging arrangement from within the Israeli leadership came from Naftali Bennett, leader of far-right Jewish Home. “The Israel-Hamas agreement is a serious and irresponsible mistake that will allow Hamas to accelerate rocket production,” he said. “Message received: terrorism pays.”

Despite the temporary truce, Hamas is continuing the weekend March of Return protests along the border. Two Palestinian protesters were killed and 60 injured in clashes on Friday, prompting Israel to close the Erez crossing into Gaza.