Germany is obsessed with its own shortcomings

Berlin Letter: There is an endless German appetite for critical comment from outsiders 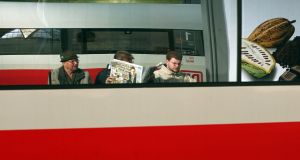 Waiting passengers of Deutsche Bahn reflected in the window of a train at a Munich station. If everyone sat wherever they liked, even on an empty train, where would that leave us? Photograph: Johannes Simon/Getty Images

If you want to watch what makes Germans tick, buy a ticket for a high-speed train and observe what happens when a crowd of passengers board at once. Like musical chairs, but on wheels and without music, wound-up strangers squeeze past each other, battling over too few seats for too few people.

Unlike in Ireland there is no muttered chorus of “sorry” but surly silence as the air crackles with enough tension to power the electric train they’ve just boarded. This Teutonic tension returns when passengers stand up in the aisle, 15 minutes before their destination, in case something untoward happens when the train reaches the station and they fail to reach the door, 10 metres away.

Even if the compartment is empty, and you happen to find yourself in an (often unmarked) reserved seat, Müller’s Law of German rail travel means you can count on being asked to move by the only other passenger who has reserved precisely this seat. Because if everyone sat wherever they liked, even on an empty train, where would that leave us?

Every country has its foibles, and most are obsessed by what others think of them – to a point. But I have yet to meet a people with a capacity to suck it up like the Germans.

Last week the Frankfurter Allgemeine daily was the latest to consider “What is German?” – a question that it suggested was, in itself, typically German. The newspaper joked that only Germans could manage to be both skilled engineers and insufferably romantic, and dogmatic while indecisive.

A final observation by the (German) author was the intriguing – and not entirely untrue – assertion that “not wanting to be German is very German”.

In the last years I have become a regulator contributor on two German radio stations, giving my five cents on life here. It’s a gift that keeps on giving, not least in contributor fees, where I show up and dish out a few Germanecdotes.

One programme is the weekly Europamagazin of WDR5 radio, based in Cologne, where a group of foreign correspondents are invited on in rotation to give their outsider’s perspective on current affairs.

The other radio programme is Typisch Deutsch, a long-running programme for the nationwide station Deutschlandfunk Kultur. Here foreign correspondents are asked to talk about our experiences of life in Germany: bread, holidays, public nudity.

In Ireland, the risk that someone will take criticism personally means most learn to keep their mouths shut

What both programmes have made me realise is that what you notice about your adoptive home says as much about you as the natives. German punctuality is one popular topic, the low level of public swearing is another and a third is Rechthaberei – the need of many Germans to be right, at all costs.

An everyday example of this is the angry German cyclist or motorist who would rather crash into a pedestrian – or, indeed, each other – to prove that they were in the right and the other in the wrong.

Another evergreen on the “Typisch Deutsch” programme is Germans’ notorious directness. Many Irish people consider Germans staggeringly rude, without reflecting on how politeness and rudeness are subjective, elastic social norms.

Live outside Ireland for a few years and you soon realise how the Irish, alongside the Swiss, are perhaps Europe’s outliers in indirectness. In the German cultural context, calling a stranger and not getting to the point of why you are on the line – Irish-style – is considered a waste of the person’s time and thus just as rude.

Afraid of being rude, I find myself asking the presenter after almost every recording if I was perhaps a little overly critical. Nein nein, is always the answer, our listeners love critical.

There is, it seems, an endless appetite in Germany for critical comment from outsiders, without ever snapping back: “Well, if you hate it here so much . . . ”

It is a typically German characteristic, if such a thing exists in a sprawling, diverse country like this, to take on board others’ opinions and to separate impersonal and personal criticism.

In Ireland, the risk that someone will take criticism personally means that many people, to spare the aggravation, learn to keep their mouths shut. They may complain later – about the taxi driver, the restaurant, the friend – to someone else who has nothing to do with the situation and can do nothing to help improve matters.

Not so here: people expect to give and take feedback, even the critical kind. It may be eye-wateringly direct but, instead of getting the hump, people have learned to go away and think about whether or not the criticism was justified.

Perhaps the most “Typisch Deutsch” characteristics are a crippling insecurity over what is typically German coupled with a quiet confidence that, as a German, there is always room for improvement.

1 Miriam Lord: Let’s call a spad a spad – this Government has woeful timing
2 Ireland’s top earners ‘do not see themselves as rich’, study finds
3 Further 334 confirmed cases of Covid-19 reported, 174 of them in Dublin
4 Dublin farmer discovers overnight rave on his land
5 Further restrictions expected for Dublin if Covid-19 infection rate does not stablilise
Real news has value SUBSCRIBE