At least 14 injured as part of US concert venue collapses 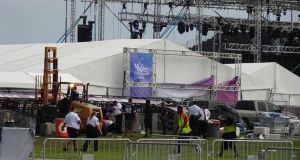 At least 14 people have been injured and taken to hospitals after trusses holding up the entrance to a resort where the Backstreet Boys were set to begin a concert in Oklahoma collapsed.

WinStar World Casino and Resort said in a statement posted on Twitter the resort began an evacuation when lightning was within 5kms of the casino in the US state.

The company said about 150 patrons did not evacuate and when the storm hit with 80-90km/h winds, it knocked over trusses and the entrance collapsed on them.

Of the 14 people taken to a hospital, two have been released. WinStar later said the concert has been postponed to a later date.

Band member Kevin Richardson tweeted that the concert had been sold out with about 12,000 fans. - Wires