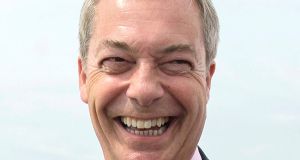 The co-founder of fashion brand Superdry is donating one million pounds (€1.11 million) to the campaign for a referendum on the final Brexit agreement as Britain prepares to outline in more detail how a no-deal outcome would work.

“I’m putting some of my money behind the People’s Vote campaign because we have a genuine chance to turn this around,” said Julian Dunkerton, a “Remainer” who opposes Britain’s planned departure from the European Union.

“I’ve got a good instinct for when a mood is going to change and we’re in one of those moments now,” he said in comments reported by several British media outlets.

Britons voted in a 2016 referendum to leave the EU but in July the proportion of voters who favour a referendum on the final terms of any Brexit deal overtook those who do not for the first time, according to opinion polls.

Britain’s Brexit minister Dominic Raab will travel to Brussels on Tuesday in a bid to pick up the pace of talks with the EU’s chief negotiator Michel Barnier, prime minister Theresa May’s office said on Saturday.

Britain will publish on Thursday the first of a series of technical notices designed to help people and businesses prepare for a no-deal scenario and Mr Raab will give a speech outlining how the government plans to mitigate against any potential risks.

“Securing a deal is still by far the most likely outcome, but we want to make sure that we clearly set out the steps that people, businesses and public services need to take in the unlikely event that we don’t reach an agreement, said Mr Raab.

Britain said it has been undertaking work on a no-deal scenario for almost two years with nearly £4 billion allocated by the finance ministry.

London and Brussels hope to agree a Brexit deal at a summit in October but Ms May faces splits within her party and the tough task of securing parliamentary approval for the final agreement, as she tries to face down rebels.

Campaigners on both sides have been stepping up their efforts in recent weeks as some Brexiteers argue against any agreement which keeps Britain tied to EU mechanisms such as the customs union or single market.

On Saturday, former leader of the United Kingdom Independence Party Nigel Farage said he would join a “battle bus” tour around the country by a pro-Brexit group which is opposed to Ms May’s plans.

The government is planning to recognise some EU regulations if London and Brussels fail to strike a deal, taking a “flexible” approach to make sure medicines, car parts and chemicals are still available, the Sunday Telegraph reported.

A spokesman at Ms May’s Downing Street office did not offer an immediate comment on the report.

But just days after a car hit pedestrians and police officers outside Britain’s parliament, junior defence minister Tobias Ellwood said military and security co-operation should not be up for debate with the EU.

“Let the Brexit talks continue – but European security should be unconditional,” he said. – Reuters