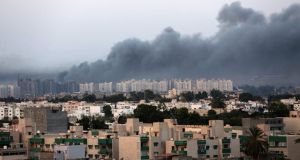 Smoke fills the sky over Tripoli after fighting between rival militias. Photograph: EPA/STR

Libya lurched closer to fragmentation and civil war at the weekend after Islamist-led militias seized the airport in the capital, proclaimed their own government and presented the world with another crisis.

Operation Dawn, a coalition of Islamist and Misrata forces, captured the airport on Saturday in fierce fighting against pro-government militias after a five-week siege that has battered parts of Tripoli. Television images showed bearded militias dancing on wrecked airliners, firing machine guns in the air and chanting “allah o Akbar” (God is great).

Yesterday, they set the airport buildings ablaze, apparently intending to destroy rather than hold it. The victory, which secures Islamist control over Tripoli, was a culmination of weeks of fighting triggered by elections in July which Islamist parties lost. Rather than accept the result, Islamist leaders accused the new parliament of being dominated by supporters of former dictator Muammar Gadafy, and have sought to restore the old national congress.

“The general national congress will hold an emergency meeting in Tripoli to save the country,” said congress spokesman Omar Ahmidan.

Libya’s official parliament, the House of Representatives, in the eastern city of Tobruk, denounced the attack as illegal, branding Dawn a “terrorist organisation” and announcing a “state of war” against the group. The move leaves Libya with two governments, one in Tripoli, one in the east of the country, battling for the hearts and minds of the country’s myriad militias.

There are few regular forces for the government to call on, with prime minister Abdullah al-Thani needing to persuade nationalist and tribal militias to try to recapture the capital.

Dawn militias are consolidating their hold on the capital by rounding up government sympathisers and people from Zintan, whose militia defended the airport. “Units from Gharyan and Abu Salem are circling the area looking for any Zintani they can find,” said one frightened resident hiding in the city.

Fighting continues to the west of Tripoli while Islamist brigades in Benghazi, 643km east, are battling with army units and nationalist militias.