At least five killed and dozens injured after tornadoes in Texas

Cars were tossed into the air, homes flattened and trees knocked during tornadoes

Tornadoes have killed five people east of Dallas in Texas and injured many others as heavy rains and damaging winds struck a broad swath of the U.S. heartland. Video: REUTERS 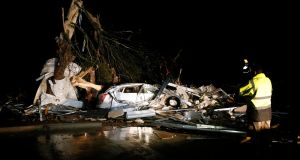 At least five people were killed in Texas on Saturday afternoon when a series of tornadoes tore through rural counties east of Dallas, the authorities said.

The tornadoes touched down around 5pm and left a broad trail of damage, tossing cars, knocking down trees and power lines, and flattening homes.

The city of Canton and the surrounding area in Van Zandt County, about 96km (60 miles) east of Dallas, appeared to be the hardest hit.

Capt Brian Horton of the Canton Fire Department said late Saturday that five people had been killed and dozens had been injured.

“What we do know is that it is very severe,” Mr Horton said at a news conference.

He said some people remained unaccounted for and that search-and-rescue teams from across Texas were on their way to assist.

The death toll will most likely rise when the authorities are better able to survey the damage, Mr Horton said.

Scores of people from the counties of Van Zandt, Henderson and Rains were taken to hospitals.

A spokeswoman for the East Texas Medical Center Regional Healthcare System said that its hospitals had received 55 patients but that only one person was in critical condition.

“We still have ambulances from our hospital as well as other systems that are on the scene tonight,” the hospital spokeswoman, Rebecca Berkley, said.

“One of our helicopters is helping tonight and landing and doing searches.”

A school in Canton and another in the city of Fruitvale were set up as triage centers to accept injured people, the authorities said. The National Weather Service reported that three tornadoes had touched down.

The tornado that hit Canton appeared to start southwest of the city and traveled more than 64km (40 miles) northeast to Emory.