EU leaders have unanimously approved tough guidelines for negotiations on Brexit, including a commitment to protecting Ireland’s interests and a guarantee that Northern Ireland could rejoin the EU as part of a united Ireland. Video: REUTERS 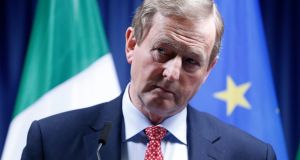 Enda Kenny told reporters in Brussels that the purpose of the statement was to ensure Brexit ‘does not undermine any provision of the Good Friday Agreement’ rather than to move towards Irish unity. Photograph: EPA 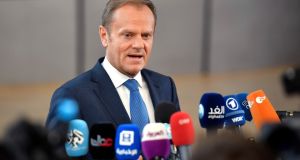 European Council president Donald Tusk speaks with the media as he arrives for an EU summit at the Europa building in Brussels on Saturday. Photograph: AP 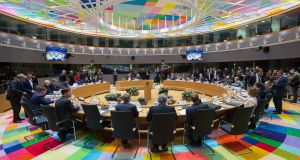 EU leaders at a special summit on Brexit in Brussels on Saturday. Photograph: EPA

European Union leaders have unanimously approved tough guidelines for negotiations on Brexit, including a commitment to protecting Ireland’s interests and a guarantee that Northern Ireland could rejoin the EU as part of a united Ireland.

The leaders took just one minute to approve the guidelines at the special EU summit on Brexit in Brussels, before breaking into applause.

German chancellor Angela Merkel said she had never seen such unity of purpose at a European Council meeting.

The Taoiseach said he was pleased with the outcome, adding that the guidelines fully reflect Ireland’s concerns.

He described the statement about the future status of a united Ireland in the EU as hugely important.

The declaration regarding Ireland paves the way for Northern Ireland to automatically become part of the EU if it ever wished to join the Republic in a united Ireland.

Mr Kenny stressed, however, that the statement’s purpose was to ensure that Brexit “does not undermine any provision of the Good Friday Agreement”, rather than to move towards Irish unity.

“The only new thing here is Brexit and we need to ensure it doesn’t undermine the Good Friday agreement. This is not about triggering any mechanism; I have been consistent in my view that the conditions for a referendum do not currently exist,” Mr Kenny said.

Brexit negotiations will begin after Britain’s election on June 8th, with an initial focus on the rights of EU citizens in Britain and British citizens on the continent, Britain’s financial obligations to the EU, and issues surrounding Ireland and the Border.

The EU’s chief negotiator, Michel Barnier, told the leaders he hopes to see sufficient progress on these issues that they can start talks on Britain’s future relationship with the EU as early as October this year.

“Michel Barnier and the Commission today announced a very clear timeframe for phase one - they foresee phase one being completed by the fall of this year and then we could move to phase two,” Dr Merkel said after the summit.

“Phase one of the negotiations will be about separation and we will negotiate phases one and two as clearly separate phases. And we will take a conscious political decision before we move from phase one - separation - to phase two, the transition to future relations.”

Dr Merkel said that it was “the most natural thing in the world” for the 27 remaining EU member states to present a united front in the negotiations, dismissing Theresa May’s assertion that EU countries were “lining up” to oppose the UK.

“We haven’t lined up against anyone. We’ve made it easier for Britain, by speaking with one voice,” she said.

Britain’s Brexit secretary David Davis said the guidelines showed that the forthcoming negotiations were likely to be tough, adding that they underscored the need for Ms May to win an enhanced mandate in June’s election.

“Both sides are clear - we want these negotiations to be conducted in the spirit of goodwill [and] sincere co-operation and with the aim of establishing a close partnership between the UK and the EU going forward. But there is no doubt that these negotiations are the most complex the UK has faced in our lifetimes.

“They will be tough and, at times, even confrontational. There are already people in Europe who oppose these aims and people at home trying to undermine them,” he said.

The declaration in relation to Northern Ireland, known in Brussels as the “Kenny text”, says: “The European Council acknowledges that the Good Friday Agreement expressly provides for an agreed mechanism whereby a united Ireland may be brought about through peaceful and democratic means.

“In this regard, the European Council acknowledges that, in accordance with international law, the entire territory of such a united Ireland would thus be part of the European Union.”

Speaking in Irish as he entered the summit, Taoiseach Enda Kenny said he was happy his fellow EU leaders were holding the special one-day summit to approve the bloc’s priorities in advance of the opening of negotiations with the UK.

Prior to the summit, president of the European Council - the highest decision-making body of the EU, made up of the heads of governments of all members states - Donald Tusk had described the priorities of the EU side as being “people, money and Ireland”.

Drafts of the EU’s priorities for talks have been circulating in European capitals for the past month, after the British government triggered the article 50 mechanism, formally giving notice of their intention to leave the EU.

Under the terms of the article, the UK will exit in two years, at the end of March 2019.

However, both sides have acknowledged the possibility of a transition period after 2019, during which the UK could gradually withdraw from EU rules, rather than a sudden exit.

The declaration on Ireland, which echoes the experience of East Germany after German unification in 1990, will be recorded as a “statement for the minutes”, the equivalent of council conclusions at a formal summit.