Stories of Colombia’s war and peace: The bomb victim

Martha Amorocho's son Alejandro was killed in the 2003 Farc bombing of El Nogal Social Club in Bogota, Colombia and her other son Juan Carlos was badly injured. Video: Dave McKechnie 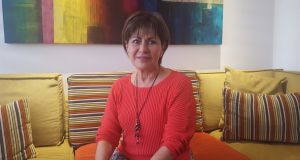 It was a Friday evening when Martha Amorocho, her husband Francisco and their 20-year-old son Alejandro arrived back at their apartment in the financial district of north Bogotá. They sat down to watch a movie when the phone rang: the eldest son, 22-year-old Juan Carlos, was at El Nogal social club around the corner with his girlfriend and wanted to know if Alejandro would join them for a burger and help drop Juan Carlos’s girlfriend home.

He didn’t have to be asked twice; the brothers were close not only in age. On weekends the two boys went together to watch their favourite football team, Millonarios. Juan Carlos, who studied electrical engineering at university, played several sports. Alejandro was a budding magician: he liked to do magic tricks for the family with cards and coins.

Alejandro said goodbye to his parents, jumped in the car and went to join his brother at El Nogal. Just as he arrived, a 200kg bomb went off in the car park on the third floor. Alejandro was killed instantly. Juan Carlos, who was in the cafeteria, suffered a terrible head injury that left him in a coma – but he survived. In all, 36 people died at the club that day, and about 200 were injured.

The El Nogal bombing on February 7th, 2003, was one of the most notorious atrocities of Colombia’s conflict. It was also one of the rare occasions when Bogotá felt the full brunt of a war that usually played out in distant territories. Although the Farc was widely blamed for the explosion at a venue that was a meeting place for the country’s elite – the interior minister, Fernando Londoño, was a member – the guerrilla group never claimed responsibility for the attack.

Then on April 5th just passed – 14 years later, in the slipstream of the peace deal – Farc finally agreed to disclose the truth about the bombing at a special upcoming event at rebuilt El Nogal.

Martha Amorocho, a vibrant, eloquent woman who looks a decade younger than her 63 years, still lives with her husband in the apartment that Alejandro left that February night – a property decorated in bright colours compatible with the fiercely positive streak of the woman who lost her son. The faded family photograph in the corner has a poignant place near toys denoting the arrival of Juan Carlos’s first child a year and a half ago. Maria-Antonia’s birth capped what Martha calls the “miracle” of Juan Carlos’s recovery.

People in general don’t know what a ‘victim’ is

Martha had little chance to grieve in the aftermath of the bombing. “I had to keep my family together. My husband was crying 24 hours a day and I had to help Juan Carlos, so I was focused on that,” she says. But in the months and years to follow, as Juan Carlos recovered his health, she began attending meetings of victims and “started to understand the complexity and the huge problem that the victims had”.

According to Centro Nacional de Memoria Histórica, a public institution that records acts of violence in the conflict, 16.9 per cent of Colombia’s population have been direct victims of the 52-year war. And yet, says Martha, the term is badly misunderstood. “People in general don’t know what a ‘victim’ is. The world is full of people who don’t have food – or people who can’t have their needs filled. Alejandro was the one who got the bad part. Juan Carlos was the real victim and I am company for Juan Carlos.”

The peace talks that began between the Colombian government and the Farc in Havana in September 2012 put uncommon emphasis on the role of victims. Late in 2014, Martha got a call to ask if she would fly out to participate. “I didn’t know exactly what I was going for, but I said: ‘Okay, I’ll go to Havana.’” The 60 invited victims were divided into five delegations and, in a scrupulous effort at fairness, of the 12 assigned to each delegation four were victims of Farc, four were victims of state actors and four were victims of paramilitaries.

I said that the violence in this country hasn’t been going on for 50 years; we’ve been killing each other for 500 years

“I said that the violence in this country hasn’t been going on for 50 years; we’ve been killing each other for 500 years. My grandfather saw the killings of his father, mother and five other people when he was seven years old. This goes through generations and generations and nothing changes. So now is the moment to do something different.”

Soon after returning from Havana, Martha got a call from the foundation at El Nogal set up in the wake of the atrocity. A former Farc guerrilla wanted to ask her forgiveness for what had happened to her family at an event it had organised – “a symbolic forgiveness, because he didn’t take part in the bombing”.

When she saw the young man on the night, Regis Ortiz, Martha thought: “He looks just like Juan Carlos.” The two of them took turns giving their testimonies. “I was talking, going through my story, when suddenly I realise I’m holding hands with Regis. We were just two human beings full of fears and anguish.”

Martha is almost evangelical on the need to teach young people about their value in building a new society in Colombia – and, especially, the need to “teach people how to talk”. “We need education – we have to take into account that truth is important. We have to have the balls to deal with the truth. We got into this mess together and together we have to get out of it. We’re not going to change in six months, that’s for sure. It’s not easy but we have to start with the kids.”

Third article in a series of four. Tomorrow: The displaced.