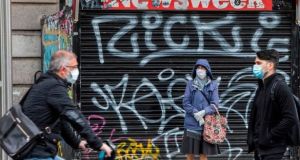 Cities continue to account for an outsized proportion of Covid-19 confirmed cases, with 44 per cent of all cases accounted for by the one-third of the population which lives in cities.

Dublin continues to be worst hit by the virus, new statistics show, with 15 deaths in the last week. It is the only county to record more than four new deaths each week for the past three weeks.

Data released Friday morning by the Central Statistics Office (CSO) shows that the overall share of new Covid-19 cases attributed to city dwellers has fallen, however, as the disease spread across the country.

At the end of March 20th, cities accounted for 52 per cent of all cases, and satellite urban towns accounted for a further 14 per cent, which is roughly in line with the percentage of the population living in such commuter-belt areas, and has remained steady up until the end of May.

However, while urban and surrounding areas remain the areas affected by the majority of overall cases - some 57 per cent as of the end of last week - smaller towns have seen their share of infection growing over the period.

For example, independent urban towns accounted for just five per cent of cases in the middle of March, but that has steadily been growing since then, and they now account for 12 per cent of all confirmed infections. Nonetheless, this is still lower than the overall percentage of the population which lives in such areas, at 18 per cent.

The figures are contained in the CSO’s third publication of a bulletin on insights Covid-19 cases and deaths, published this morning. It also shows that the number of people who have died from Covid-19, or have been diagnosed as a confirmed case, has fallen for the sixth week in a row.

The CSO dataset on deaths is unique as it is based on the actual date a death took place, rather than when the deaths are reported. Probable deaths are not included in the CSO analysis.

By looking at the actual date of death, the CSO found that the number of people who died with the disease has fallen for the sixth week in a row - 34 people died in the week ending May 29th. This is down from the peak of 270 deaths that occurred in the week ending April 17th.