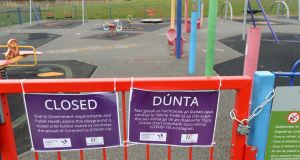 A playground at Seagrange Park, Baldoyle, Dublin which was closed in March due due to the Covid-19 pandemic.Photograph: Alan Betson

Children’s playgrounds across Dublin city will remain shut on Monday, despite assurances from Taoiseach Leo Varadkar the facilities could open next week.

However Dublin City Council said it will not reopen its playgrounds next week, which have been fenced off since the middle of March under coronavirus restrictions, and has yet to set any date for when they will be reopened.

Mr Varadkar on Friday confirmed that “outdoor facilities and amenities for children” could reopen under the acceleration of phase two of the Government’s roadmap for easing Covid-19 restrictions. This would include the reopening playgrounds as long as they are supervised, he said.

However Dublin City Council said it “does not operate supervised playgrounds” and so will not be reopening these facilities next week “pending further clarification”.

The council operates about 100 playgrounds, almost 70 of which are in public parks with the remainder located in the grounds of social housing complexes.

To operate a supervised service during the opening hours of these facilities would require at least three staff members per playground, which would mean hundreds of council staff would need to be seconded to work at these sites. It is understood the council does not have this number of staff available and it is unlikely sufficient numbers of staff would have the required Garda vetting to supervise children in these settings.

It is also unknown what level of cleansing would be required for the playground equipment, and how it could be assured that fewer than 15 children would be using the park at any time.

Fingal County Council in the north of the county said it is also awaiting “further clarification” on the issue. It is not known if playgrounds in the Dun Laoghaire Rathdown or South Dublin County Council areas will reopen next week.

Mr Varadkar also confirmed that the reopening may include include commercial amenities for children, such as adventure parks and open farms. Mr Varadkar also announced outdoor summer camps for children can also be run, once there are no more than 15 people mixing together.

Mr Varadkar also said a summer education programme for children with special educational needs and those at risk of disadvantage will proceed.

The programme, similar to the existing extended school year or July Provision scheme, will rely on schools, teachers and special needs assistants (SNAs) choosing to participate.

Typically about 10,000 children with autism and or with a severe or profound intellectual disability are entitled to home tuition or in-school support during the summer.

This year, Minister for Education Joe McHugh said it will also include young people with complex needs and children with Down syndrome.

Mr McHugh will bring detailed proposals to Government next week, but he has confirmed that any child who has been eligible in previous years will be eligible again this summer. The plans will involve both a school-based scheme and a home-based scheme, he said.

Disability groups who attended a meeting with Department of Education officials on Thursday to discuss the proposals expressed alarm that draft proposals were “extremely limited” in scope and could exclude thousands of vulnerable young people.

Both Inclusion Ireland and autism charity AsIAm said they were told by officials that only children attending special schools or classes will be able to attend the programme this year.

The Department of Education later released a statement stating that this was not the case and anybody who has been eligible in previous years will be eligible again this summer.

In a new statement on Friday, Mr McHugh said the programme will be a stepping stone to help some young people ahead of the next school year and is in line with public health guidance.

“The programme will help children to renew relationships, routines and connections with school and with learning and help to support ongoing social development and wellbeing,” he said.

“It gives us an opportunity to provide a vital additional support for some of the children with significant special educational needs and those who have been at risk of educational disadvantage since schools closed in March.”

Further engagement with the school sector will take place as proposals are finalised over the coming week.

The scale of the programme, however, will depend on schools, teachers and special needs assistants (SNAs) choosing to participate.

It is unclear, at this stage, how many will be prepared to do so in light of public health risks.

Mr McHugh said teachers and SNAs have worked “harder than ever” since schools closed 12 weeks and he was sure they would try to do whatever they can to support the summer programme.

“We now want to work towards a new level of engagement. The focus will be on students and young people with complex needs - including those who live with significant behavioural, social, emotional and sensory difficulties,” he said.

“It will be similar to the July Provision of previous years and children with Down syndrome will be included as part of our plans for this summer.”

Down Syndrome Ireland said the announcement means that about 1,200 more children with Down syndrome will be eligible for the programme.

It said children with Down syndrome have traditionally been “actively discriminated against” by denying them entry to the extended school year.

Deirdre Saul of Down Syndrome Ireland said: “We will continue to call on the Government to make the extended school year available in the future for all children with Down syndrome.

“We congratulate all the organisations and families involved in this long campaign and for having their voices heard. We look forward to seeing practical, accessible options being provided to support families this summer and into the future.”

Meanwhile Dublin city libraries will also not be open to the public next week. While Mr Varadkar said in his speech on Friday that public libraries could open, the council will be operating a “call and collect” service only, in just six branches from Monday. These are: Cabra, Coolock and Raheny on the north side, and Dolphin’s Barn, Rathmines and Walkinstown on the south side.

Library staff will organise a date and time for requested books to be collected.

“You cannot come into the library to browse the books,” the council said.